Support for Clinton Up Among Democrats Nationally

At the beginning of the month following their near-tie in the Iowa caucus, Clinton held a 50% to 32% lead over Sanders. The closest this race has ever been was in December when Clinton was ahead 46% to 30%. Former Maryland Governor Martin O’Malley who has since dropped out of the race earned seven percent (7%) support at that time. 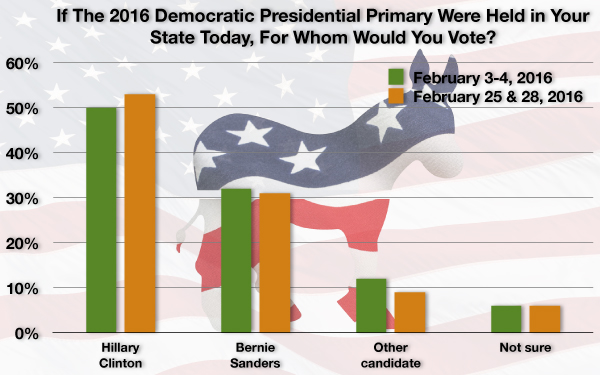 This latest survey is the first time Clinton has risen above the 50% mark since the Democratic debates began in October. The survey also suggests that Sanders’ support has peaked and that Clinton is winning over voters who were previously undecided.

After her disappointingly close finish in Iowa and her resounding loss in the New Hampshire primary, Clinton counted on the minority vote in subsequent primaries and caucuses to firmly reestablish her as the favorite. So far, that support has delivered her a win in the Nevada caucus and a huge victory in South Carolina.

The former secretary of State earns 72% support among black Democratic primary voters nationally, compared to 48% of whites and 49% from other minority voters.

(Want a free daily email update? If it's in the news, it's in our polls).  Rasmussen Reports updates are also available on Twitter or Facebook.

The survey of 541 Likely Democratic Primary Voters was conducted on February 25 and 28, 2016 by Rasmussen Reports. The margin of sampling error is +/- 4.5 percentage points with a 95% level of confidence. Field work for all Rasmussen Reports surveys is conducted by Pulse Opinion Research, LLC. See methodology.

Our surveying, however, has long suggested that Clinton’s nomination has never been in doubt. Our latest monthly Hillary Meter survey, released two weeks ago and just one week after her loss in New Hampshire, found that 81% of Democrats still believe Clinton is likely to be their nominee, with 43% who say it’s Very Likely.

Clinton still runs stronger among women than among men.

But her real weakness continues to be voters under 40. She trails Sanders 45% to 38% among Democrats in that age group. Among middle-aged Democrats, by contrast, Clinton has 58% support, and she earns 69% of the vote among those 65 and older.

Fifty-six percent (56%) of registered Democrats favor Clinton vs. 27% who prefer Sanders. Among unaffiliated voters who can vote in open Democratic primaries in some states, the senator from Vermont posts a 57% to 36% lead.

Democratic voters said in late January that news reports about Clinton’s campaign being in trouble were more a creation of the media than reality.

Most voters in general consider Clinton a political liberal, but Democrats tend to regard her as a moderate.

Clinton has called for free lawyers for children who have entered this country illegally, and a law proposed in the state of Maryland would expand that to include women who are here illegally as well. But 63% of all voters oppose the federal government providing taxpayer-funded lawyers to women and children who entered the country illegally to help them fight deportation.

Prominent female supporters of Clinton recently declared that women voters have an obligation to vote for a woman candidate, but women overwhelmingly reject that notion.

When it comes to which candidate voters trust more on key issues, Republican presidential front-runner Donald Trump leads when it comes to the economy, job creation and immigration. Clinton has held her lead on social issues but has widened her advantage on the environment. The two are virtually tied now when voters are asked whom they trust more to handle national security.

Two senior Republican senators have called for the Justice Department to step aside and choose an independent special prosecutor to decide whether Clinton should be prosecuted for mishandling classified information while she was secretary of State. Most voters think that’s the way to go to avoid any possible conflict of interest.

The survey of 541 Likely Democratic Primary Voters was conducted on February 25 and 28, 2016 by Rasmussen Reports. The margin of sampling error is +/- 4.5 percentage points with a 95% level of confidence. Field work for all Rasmussen Reports surveys is conducted by Pulse Opinion Research, LLC. See methodology.

What America Thinks: Can Trump and Clinton Hang on Through South Carolina, Nevada?