Following Saturday night's debate, the race between the top two contenders for the Democratic presidential nomination is closer than ever, but Hillary Clinton is the heavy favorite among voters who are already certain of their vote in 2016.

The latest Rasmussen Reports national telephone survey - taken on the two nights after the debate - finds that 46% of Likely Democratic Voters would vote for Clinton if the Democratic presidential primary were held in their state today. Thirty percent (30%) would opt for Vermont Senator Bernie Sanders, while seven percent (7%) prefer former Maryland Governor Martin O’Malley. Nine percent (9%) like some other candidate, and seven percent (7%) are undecided. (To see survey question wording, click here.)

Just after the second Democratic debate in November, Clinton drew 50% support to Sanders’ 29%. Clinton held a similar 50% to 26% lead against Sanders after the first debate in October. O’Malley has gained just one point of support following each debate. 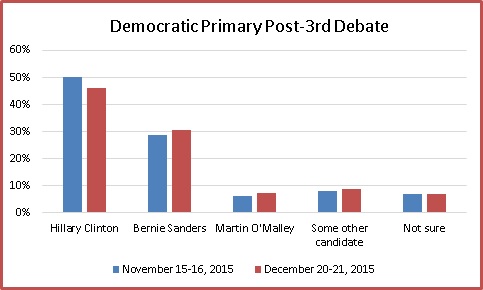 Sanders continues to hold a slight edge over Clinton among Democrats under 40, but Clinton leads by double digits among older voters.

However, among the 48% of all Democratic voters who say they are already certain of their vote and aren't going to change their mind, 59% prefer Clinton; 32% back Sanders, and nine percent (9%) choose O’Malley.

(Want a free daily e-mail update? If it's in the news, it's in our polls).  Rasmussen Reports updates are also available on Twitter or Facebook.

The survey of 546 Likely Democratic Primary Voters was conducted on December 20-21, 2015 by Rasmussen Reports. The margin of sampling error is +/- 4.5 percentage points with a 95% level of confidence. Field work for all Rasmussen Reports surveys is conducted by Pulse Opinion Research, LLC. See methodology.

Clinton’s performance at Saturday night’s debate – focusing much of her fire on Donald Trump and the Republican presidential field – suggests that the former first lady and her top aides agree that her Democratic rivals aren’t worth her full attention anymore.

While most women Democratic primary voters (55%) prefer Clinton, men are evenly split between her and Sanders.

Independent voters who plan on voting in the Democratic primary prefer Sanders by a 53% to 33% margin. Clinton holds a 48% to 28% lead among Democrats.

While Clinton holds dominant leads among self-described conservative and moderate primary voters, she and Sanders are tied among liberals.

Sanders and O’Malley have complained repeatedly about the national Democratic Party’s decision to hold just six debates, compared to the 12 scheduled by the GOP. But most Democrats are fine with just six debates.

Sixty-six percent (66%) of voters say the news media focus too much on Clinton and Trump at the expense of the other presidential candidates. But voters are far more likely to think the media is biased against Trump than against Clinton.

Voters are evenly divided when asked whether Clinton or Trump would best keep the country safe from terrorism.

An earlier survey found that voters trusted Trump more than Clinton on economic issues. But most voters don’t trust either one of them.

The survey of 546 Likely Democratic Primary Voters was conducted on December 20-21, 2015 by Rasmussen Reports. The margin of sampling error is +/- 4.5 percentage points with a 95% level of confidence. Field work for all Rasmussen Reports surveys is conducted by Pulse Opinion Research, LLC. See methodology.