Who we favor in all 507 of Tuesday’s Senate, gubernatorial, and House races

If you’re in Charlottesville tonight, please join the Crystal Ball team — Larry J. Sabato, Kyle Kondik, and Geoffrey Skelley — for a free presentation on the 2014 midterms at 7 p.m. in Wilson Hall, Room 402 on the Grounds of the University of Virginia. Visit the U.Va. Center for Politics website for more information and to register to attend.

As is our longstanding tradition, we at the Crystal Ball attempt to call every election for House, Senate, governor, and in presidential years, the Electoral College. After studying these campaigns for months or years, we believe we owe you our best judgment about the outcomes. While we’re proud of our overall record over the years, we always miss a few calls, sometimes more than a few. Toss-ups are vexing, and the massive amounts of intelligence from polls, analysts, campaign managers, and party officials can be exceptionally contradictory. Not many of our sources have ever attempted to mislead us; they sincerely believe this candidate or that one will win — and smart people on the other side of the aisle are equally convinced their nominees will triumph.

The day after any election (or runoff or recount), when the actual winners are known, it all seems so obvious in retrospect. But of course it isn’t, pre-election. We apologize in advance — and we’ll do it again post-election — for all the races we will inevitably miscall. Our goal is perfection, and we’ll achieve it on the proverbial twelfth of never.

We also want to take this opportunity to thank all of you who have bothered to take our calls, or to e-mail us or tweet to us about your take on the 2014 contests. There are thousands of clever, canny observers and activists out there of all persuasions and ages, and we’ve learned much from you. Please continue to share your knowledge and views with the Crystal Ball team. We can’t always find the time to respond personally, but we read every missive you send us.

Finally, let’s keep the enterprise of election prediction in perspective. We’re not exactly curing cancer. This is fun for us and, we hope, entertaining for you. But the serious purpose, other than trying to understand why voters behave as they do, is engagement and civic education. Everyone criticizes horserace coverage, but the truth is that millions are fascinated by the discussion of who’s ahead, who’s behind, and who’s gaining. Often it is that particular aspect of politics that serves as a hook to reel in citizens and open to them the consequential world of elections. Once they are attracted by “the only sport for adults,” as politics has been termed, many people are more inclined to learn about the candidates and the issues, and to participate in the process more fully.

With that, here are our final calls for 2014’s 507 Senate, gubernatorial, and House contests. We have offered our picks in 498 of these races already. Here are the final nine picks: 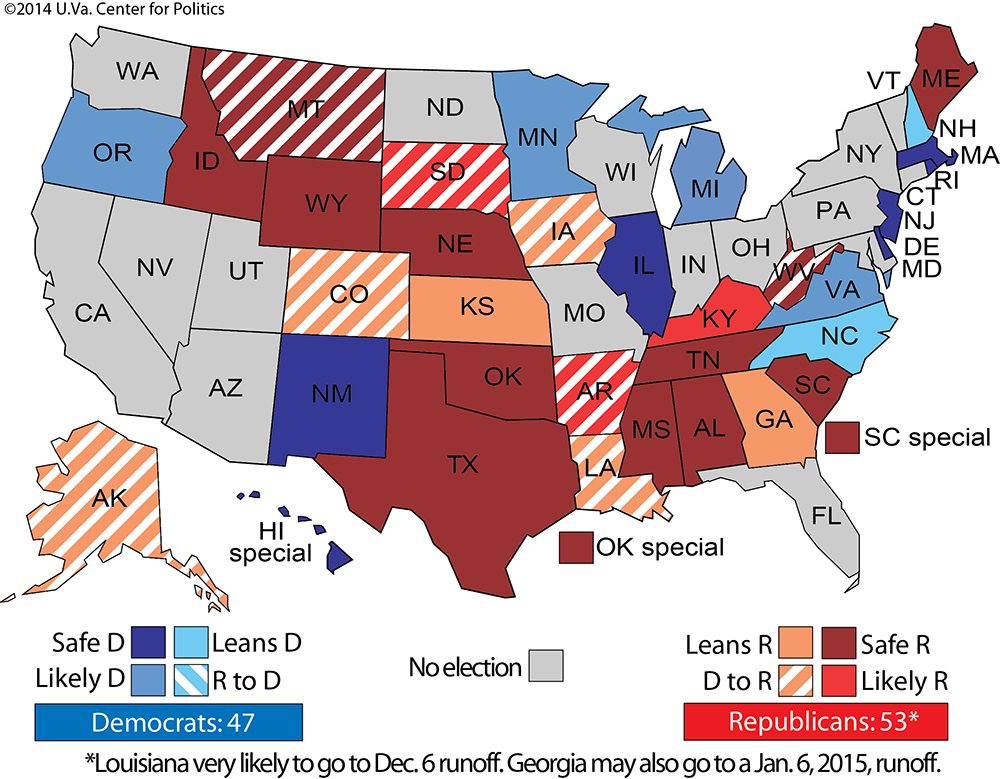 The Kansas race between embattled, weak Sen. Pat Roberts (R) and independent Greg Orman is perhaps the closest, most difficult-to-predict Senate race in the country. However, at the end of the day, a Republican has not lost a Senate race in this state since 1932. It may happen, but we just can’t pull the trigger and predict it. LEANS REPUBLICAN

We’ve been calling Georgia and Louisiana “Toss-up/Leans Runoff” in recent weeks because we expected both to eventually go to runoffs. Louisiana will, and Georgia might, but we now believe Republicans are favored to eventually win both. So we’re just going to call both LEANS REPUBLICAN going into Election Day: If both do in fact go to runoffs, then the Leans GOP ratings will apply, at least initially, to the overtime contests.

Those are the only changes for the Senate this week. For explanations of our ratings in the other most competitive races, see our recent Senate analysis. 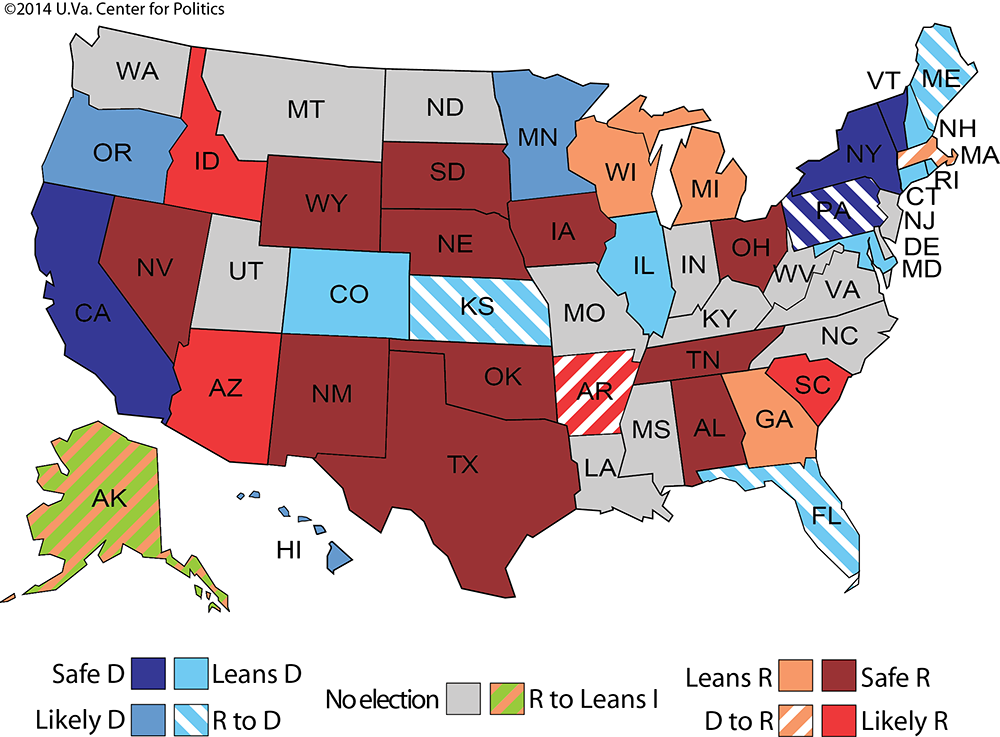 In the gubernatorial contests, there are a large number that are simply too close to call. But we’re going to do our best to pick them anyway. Our net calculations work out as follows: Democrats to gain two statehouses, independents to gain one as well, and Republicans to lose three governorships. We have six final changes before Tuesday’s election, and for commentary on the other competitive races, see last week’s overview.

Independent Bill Walker narrowly leads the Alaska contest, and Gov. Sean Parnell’s (R) campaign is dealing with a number of problems, particularly allegations of sexual harassment and other misconduct in the state National Guard. Walker is the pick. LEANS INDEPENDENT

In Connecticut, Gov. Dan Malloy (D) has struggled with poor approval ratings basically from the get-go, yet remains in a dead-even race in a rematch with his 2010 opponent, Tom Foley (R). The challenger appeared to get a boost when conservative independent candidate Joe Visconti decided to drop out of the race and endorse Foley. On Monday morning, however, Quinnipiac University (based in the Nutmeg State) released its final survey in the race, which found Malloy ahead 47%-44%. We’ve decided to stick with the incumbent, barely. LEANS DEMOCRATIC

Down south in Florida, Gov. Rick Scott (R) and former Republican Gov. Charlie Crist (D) have waged an ugly battle for the Sunshine State governorship. Although Crist holds an extremely slim lead in the poll averages, there’s little question that the incumbent Scott could wind up winning. Still, we have to pick someone, and what evidence our sources have provided us suggests that Crist is, ever-so-slightly, the better bet. LEANS DEMOCRATIC

In Georgia, Gov. Nathan Deal (R) seems more likely than state Sen. Jason Carter (D) to win on Election Day, though the race may well end up going to a Dec. 2 runoff. But even if it does, Deal will have a slight edge going into that second election. The incumbent is now favored to win, whether it’s tomorrow or December. LEANS REPUBLICAN

We can’t quite believe it, but Gov. Pat Quinn (D) may actually survive. Despite ugly approval ratings, Quinn is running essentially even with businessman Bruce Rauner (R). Illinois is a blue state, and in what is pretty much a coin-flip, we’re taking Quinn. LEANS DEMOCRATIC

A lot of Republicans in Kansas are unhappy with both Gov. Sam Brownback (R) and Sen. Pat Roberts (R). However, the incumbent running in a federal race, Roberts, may well be saved by anti-Obama feelings in a deeply red state. Brownback, running in a state-level contest, may not. Although Kansas is sharply Republican, over the last half century Democrats have controlled the Sunflower State governorship for 28 years. It’s obviously super close, but we think there’s a strong enough anti-Brownback feeling, particularly among some rural Kansans upset with education cuts, that House Minority Leader Paul Davis (D) will eke out a win. LEANS DEMOCRATIC

After picking all the Toss-ups last Thursday — see that piece for explanations of our thinking on all the closest races — and then checking back in with our sources over the weekend, we’ve decided to just stick with all of our original picks. So our projection remains a Republican net gain of nine seats, for a 243-192 House majority. 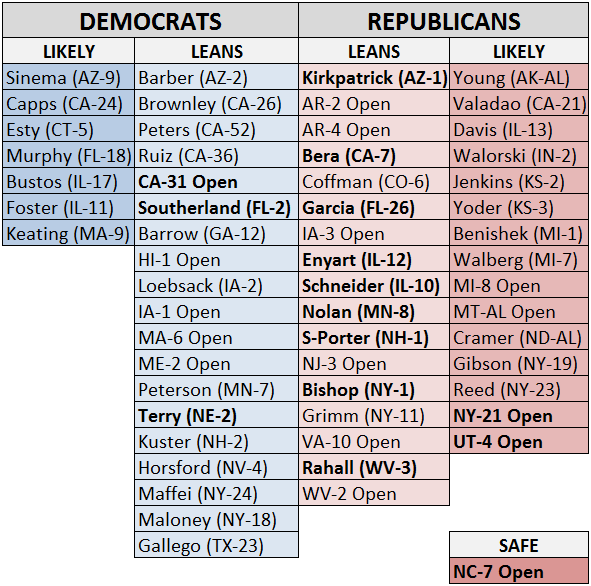