Former Sen. Russ Feingold’s (D) long-expected decision to challenge Sen. Ron Johnson (R) in a 2016 rematch crystallized for us that Johnson is the most vulnerable incumbent senator in the country. But it also helped put the other top Senate races into context.

First of all, let’s re-set the scene. Map 1 shows Senate Class 3, which will be contested in November 2016. The 34 seats up next year are lopsidedly controlled by Republicans: They are defending 24 seats, while the Democrats are only defending 10. 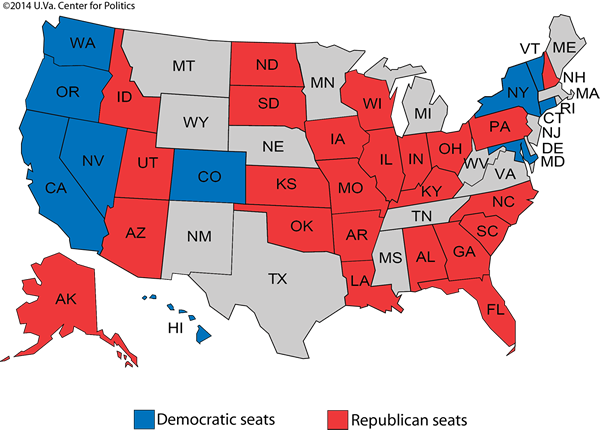 This is what happens in Senate elections: The successes of one cycle that occur under favorable conditions -- 2010 for Republicans -- lead to challenges in a future cycle where the national environment is not as ideal. The GOP is overextended on next year’s Senate map, period.

However, Republicans are not as overextended as Democrats were on last year’s Senate map. Democrats held seven seats going into that election won by Mitt Romney -- Alaska, Arkansas, Louisiana, Montana, North Carolina, South Dakota, and West Virginia -- and all but one (North Carolina) were blowouts for the GOP in 2012. Even including the Tar Heel State, Romney got an average of 57% of the vote in these seven states, or about 10 points better than he performed nationally. Republicans swept all seven states, and added swing states won twice by President Obama, Colorado and Iowa, to their Senate haul, netting nine seats and a 54-46 edge in the current Congress. Additionally, four of those nine flipped seats were open, so retirements hurt Democrats as well.

In 2016, Republicans are the ones defending turf won by the other party in the last presidential election, but it’s a collection of states whose presidential election results were far closer to the national average in 2012. Obama-state Republicans are defending seven seats: Florida, Illinois, Iowa, New Hampshire, Ohio, Pennsylvania, and Wisconsin. Of these, the Land of Lincoln is really the only one that we feel supremely confident the Democratic presidential nominee will carry; at the same time, only Florida and Ohio were less Democratic than the nation as a whole in Obama’s two elections.

Taken together, Obama’s average 2012 performance in these seven states was 52.4%, or roughly just a point and a half better than he did nationally. Additionally, one of these states has an entrenched, popular incumbent -- Sen. Chuck Grassley (R-IA) -- who is virtually guaranteed reelection so long as he’s on the ballot (and he plans to be). Of the other six, only one, Florida, is an open seat.

The point is this: Democrats have tantalizing opportunities in ‘16, but the terrain is not as clearly favorable to them as the 2014 map was to the Republicans.

Early attention has focused on the three most reliably Democratic states of the seven mentioned above: Illinois, Pennsylvania, and Wisconsin. It is right to assume that there’s not much of a credible path to a Democratic Senate restoration if the party doesn’t sweep these states, and reasonable minds differ as to which state provides the best opportunity for Democrats. We started all three states as Toss-ups in our initial ratings, but we now see the races as distinctly different.

Which brings us back to Feingold, and the first domino Democrats must knock over to win the Senate.

There seems to be a wide consensus that, of the vulnerable Republican senators in 2016, Ron Johnson of Wisconsin is the weakest. While Feingold has undeniable vulnerabilities, and he is hardly a lock to win back the Senate seat he lost to Johnson in 2010, we think he starts as the favorite. So we’re moving Wisconsin to Leans Democratic and making Johnson the explicit underdog -- an unusual position for an incumbent, especially this early in the cycle. But even members of Johnson’s party seriously question whether he has made the kind of ideological concessions in the Senate that could help him win under conditions that probably won’t be as ideal as they were for him in 2010. The respected Marquette Law School Poll shows Feingold leading Johnson by a staggering 16 points as the race begins. That strikes us as high, but we do believe Feingold begins ahead.

Optimistic Democrats also expect to take the Senate seat in reliably blue Illinois, which they lost to Mark Kirk (R) in the GOP wave year of 2010 by a small margin (about 1.5 points). Kirk had been a five-term House member from the suburban Chicago area; he represented a competitive seat and voted a fairly moderate line. Kirk’s recognition of the need to attract Democratic votes produced a similar Senate record, but the senator is more defined by the devastating stroke he suffered in January 2012. While he survived the ordeal, Kirk faced a long and difficult rehabilitation to overcome substantial paralysis. His determination to return to the Senate despite continuing physical limitations has won him both sympathy and respect, and Kirk is already running an ad about his recovery.

Illinois will undoubtedly back the Democratic presidential nominee, and probably by a wide margin, which should provide a major assist to the party’s eventual Senate candidate. That’s likely to be Rep. Tammy Duckworth, a two-term congresswoman and a much-decorated double amputee in the Iraq War, though at least one other candidate, Chicago Urban League president and CEO Andrea Zopp, is also vying for the nomination. At this point, the only sensible rating continues to be Toss-up, even though Illinois is more Democratic than Wisconsin. We’re giving Kirk some benefit of the doubt, and we want to see how Duckworth performs as a statewide candidate.

Finally, there’s Pennsylvania, which is generally a bit more Democratic than the nation as a whole in presidential races. While Sen. Pat Toomey (R) only barely beat former Rep. Joe Sestak (D) in 2010, we think the race has developed in such a way that he merits a slight edge in our ratings: We’re moving Pennsylvania Senate to Leans Republican.

Franklin and Marshall Prof. Terry Madonna and former Penn State professor Michael Young recently made a solid observation about Toomey in their regular Politically Uncorrected column on Pennsylvania politics: “Toomey’s personal style is neither confrontational nor provocative. His mild mannered and low-key demeanor resonates well with the Pennsylvania electorate. Indeed, it is a style Republicans have won with for decades despite the substantial Democratic voter registration edge in the Keystone state.”

Remember, this is the state that reelected Rick Santorum (R) to the Senate in 2000 while backing Al Gore, and although Santorum is to the left economically of Toomey, who is a former president of the very economically conservative Club for Growth, Toomey is not nearly the culture warrior that Santorum was and is. Toomey’s savvy enough that he’s probably not going to beat himself, though a recent reversal -- he stopped sponsoring a bill that would have delayed a train safety system after the recent deadly Amtrak crash -- is but one issue that Democrats can attempt to exploit against a senator who is significantly more conservative than a majority of his constituents.

Another factor is at work in the Keystone State. National Democrats loathe Joe Sestak, who is running again. The antipathy has developed for a multitude of reasons, not least his successful challenge to party-switching former Sen. Arlen Specter in a 2010 primary as well as the fact that Sestak simply does not take direction or advice from the leadership. With some encouragement, Allentown Mayor Ed Pawlowski (D) jumped into the primary, but his bid for governor last cycle was a flop. Democrats are probably going to try to get another candidate to enter -- Montgomery County Commissioner Josh Shapiro (D) is often mentioned -- but at this point they appear likely to be stuck with Sestak. And it’s quite possible Sestak could beat Toomey; he came close to Toomey six years ago in a highly unfavorable national environment. National Democrats will almost certainly support Sestak’s candidacy (if he’s the nominee) because of the importance of this seat in their overall Senate strategy. Let’s remember, the Democratic Senatorial Campaign Committee ended up spending millions against Toomey (and in support of Sestak) in 2010 despite propping up Specter in the primary.

The presidential race might matter more in this race than any other factor: If Hillary Clinton wins by more than Barack Obama’s 2012 Pennsylvania margin of slightly more than five points, Toomey will be in real trouble. But as of now we can imagine the incumbent winning a majority of the small pool of actual independents plus a few points worth of crossover support from Democratic presidential voters, which might be enough. This is a very tenuous Leans Republican, like similarly rated races featuring first-term GOP incumbents in New Hampshire and Ohio. 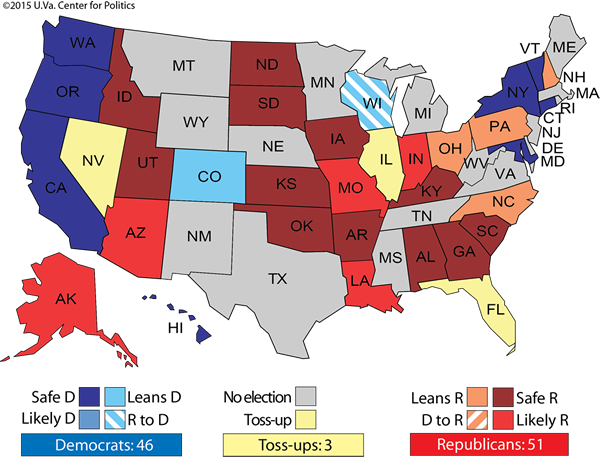 Ultimately, there’s a three-step process that Democrats must complete to win back the Senate next year:

Ultimately, our assessment of the Senate situation remains this: Democrats have a decent chance to win the Senate next year, but the Republicans retain better odds to hold it because of the cushion they built for themselves in last year’s election. If the GOP had only won a total of 51 or 52 seats in 2014, then Democrats might well be hurtling toward a Senate takeover in ’16.

The great unknown as of May 2015 is the presidential outcome. If either party’s top-of-the-ticket candidate runs impressively and has coattails in most of these swing presidential/Senate states, then the bonus on election night will be control of both the White House and the Senate. After all, split-ticket victories are getting few and far between, not just in solid red and blue territory but also in the most competitive states.