The Election is Trump’s to Lose

Election season is underway, with less than a year until the mother of all elections in November 2020. Will Americans vote to keep America great or toss 250 years of liberty and prosperity to the wind in favor of socialism? Is President Donald Trump headed to a second term or will the deep state establishment thwart his reelection at any cost?

I contend that the 2020 election is Trump’s to lose. Despite the media’s endless claim that “the walls are closing in” on the President, with every bit of news being a “bombshell” and that impeachment is a foregone conclusion, a more objective look at the electoral landscape demonstrates that this is liberal projection. The media and their Democrat party minions project their fantasies on Trump, when in reality the walls are closing in on them.

Start with the polls. Rasmussen, the most accurate pollster predicting the 2016 election, tracks likely voters in their Daily Presidential Tracking Poll. These are the voters most probably deciding the 2020 election, as opposed to other polls which survey registered voters, eligible voters, or whoever happens to answer the phone.

As of November 8, 2019, Trump sits at 49 percent total approval, compared to Obama at 45 percent at the exact same timepoint in their respective presidencies. We know who won reelection in 2012, quite easily. Obama had mostly favorable media coverage while Trump’s coverage is almost entirely negative and hostile. Yet half of likely voters approve of the job Trump is doing as president.

National polls are fine and good, but presidents are not elected by a national popular vote, despite the wishes of Hillary Clinton and others. As the actual election is a series of state elections called the Electoral College, how is Trump doing in the states necessary for him to win the in electoral college?

A New York Times survey of registered voters reveals, “President Trump remains highly competitive in the battleground states likeliest to decide his re-election.” Trump’s three rivals at this point are Biden, Sanders, and Warren. Biden’s pay-to-play corruption is just beginning to come to light. If he is the nominee, there will be an onslaught of revelations involving Ukraine, China, Romania, and who knows where else. Sanders and Warren, with their budget busting Medicare-for-all plans along with green new deals, reparations, wealth taxes, and open borders make them unelectable in a general election.

Another poll shows Trump’s approval numbers in battleground states of Wisconsin, Michigan, and Minnesota higher than in 2016. Perhaps voters in those states are noticing the strong economy.

As James Carville said during the Bill Clinton presidential campaign, “It’s the economy stupid.” How is the economy doing now? Record low unemployment, particularly for women and minorities, rising family incomes, and a stock market hitting new highs every week.

If the economy stays on track, Trump is, “on course to win re-election in 2020, according to economic models with a track record of predicting who wins the White House.” This is based on three economic models, also assuming a stable economy, steady approval ratings, and voter turnout consistent with past elections.

Then there is the enthusiasm factor. Trump rallies are packed with supporters, as in a recent rally in Louisiana with about 7500 in attendance, more than 40,000 requesting tickets and supporters lining up Tuesday afternoon for a Wednesday evening event. Lately the President has been having a rally a week.

At this past weekend’s LSU vs Alabama football game, Trump received a standing ovation of close to a minute from the 100K plus crowd as this video shows. 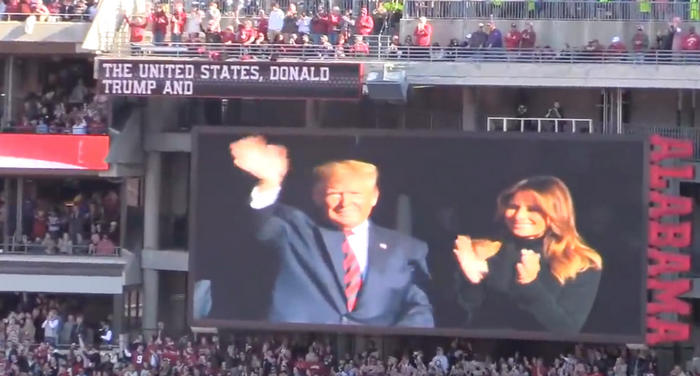 Compare Trump’s rally crowds to those of candidate Joe Biden. At his Philadelphia campaign kickoff in May, the Philadelphia Inquirer noted a, “Decent-but-not-overwhelming crowd (probably not quite the 6,000 estimated by the Biden campaign) for the rally was sprinkled with blacks and Latinos but overwhelmingly white.”

For the front runner Democrat, a small white crowd does not auger well for the party which supposedly has the minority vote locked up. A recent Hill-HarrisX poll shows 15 percent of black voters supporting Trump, twice the support he had when he won in 2016.

Gallup also throws water on the Democrat enthusiasm parade with these poll results showing Republicans more excited about the election than they should be, based on historic trends.

Currently, about two in three Republicans (66%) and Democrats (65%) report being more excited about voting than they were in previous elections. This differs from the typical pattern Gallup has seen over the years, whereby those who identify with the political party of the incumbent president have been less enthusiastic about voting than members of the opposing party. This is true whether that president is running for election or leaving office.

Other storm clouds loom on the horizon for Democrats. Michael Flynn’s pitbull attorney Sydney Powell is methodically exposing malicious government prosecution persecution of General Flynn through doctored FBI 302 statements. Flynn was an early Obama FBI target, getting the ball rolling on the phony Russian collusion narrative. As that thread is pulled, expect the ball of deep state deception to continue unraveling.

AG Barr and US Attorney Durham are pulling on a different thread, investigating the origins and motivations for the Russia hoax. IG Horowitz is tugging on yet another thread, looking at the FISA applications used to spy on Trump campaign aides, with his report due any day now.

The loose threads all lead to a tangled ball of sedition, Obama and his administration attempting to prevent the election of, and then undermine the presidency of Donald Trump. Despite media attempts to label this all as “conspiracy theory,” unlike the “mountains of evidence” of Trump-Russia collusion promised for two years, this will all come out.

When and how is anyone’s guess, but Trump is a master of optics and showmanship. Expect these revelations timed to produce maximum pain and damage for the Democrat party. Trump all but telegraphed these coming attractions when he told reporters the other day, “I caught the swamp, I caught them all.”

Lastly is the impeachment charade, getting flimsier by the day, likely to backfire on Rep Adam Schiff and his fellow conspirators in a big way. Between whistle blowers and super-secret testimony, the entire Ukraine story appears to have been cooked up after Mueller flamed out, as another seditious bite of the “Get Trump” deep state coup. Consider that the entire Ukraine whistle blower story was a sting operation and trap laid out by President Trump, as blogger Seth Levy postulates in this interesting article.

These are Hail Mary passes now in the fourth quarter of Trump’s first term, attempting to stop the inevitability of a second Trump term in the White House. From the polls to the bumbling plots of the Democrat Keystone Cops and media to overturn an election, nothing seems to be going in the Democrat direction.

Meanwhile Trump’s base of support is solid and Trump himself is relaxed, confident, and comfortable. CNN wants everyone to believe their daily warning that “The walls are closing in” on the President, but the reality that this upcoming election is his to lose. And knowing how Trump likes to win, the smart money suggests he will do just that.