POTUS Popping in the Polls

Watch cable news, particularly CNN or MSNBC, and hear how the “walls are closing in” on President Trump. Impeachment is underway, a solemn and sober process, celebrated by House Speaker Pelosi handing out autographed pens during the impeachment article signing ceremony. One would think she was signing landmark legislation like the Civil Rights Act given the pomp and circumstance.

Meanwhile the Senate passed the USMCA trade agreement, now ready for Trump’s signature, another promise made and kept by the accidental president who has no idea what he is doing. The rube of a president also announced a trade deal with China, quite favorable to the US, fulfilling yet another campaign pledge.

The stock market ticks up while unemployment ticks down, so much that the new problem is a labor shortage. From workers on unemployment lines during the Obama years we will soon have companies on employment lines, waiting for the next available worker.

This is what Democrats are running against – peace and prosperity. They tell us these are not the best of times, but rather the worst of times, and that their socialistic schemes like Medicare-For-All and the Green New Deal are the solutions to problems that exist only in the minds of the far left.

Even the polls are popping for President Trump. With the constant barrage of negative media coverage and the looming threat of an impeachment trial hanging over Trump’s head, his poll numbers should be tanking. But quite the opposite is happening, much to the frustration of his Democrat and media detractors. 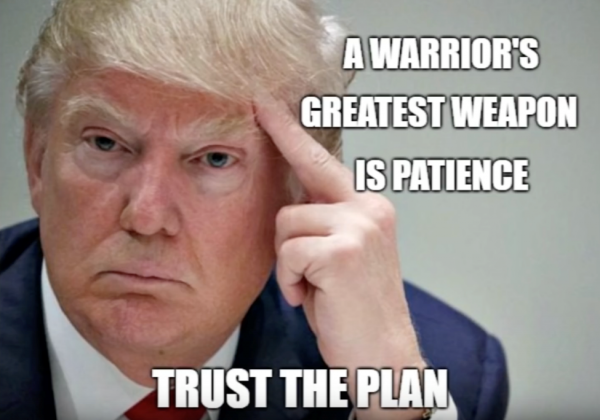 Start with Rasmussen, the most accurate pollster in the 2016 presidential election. In their Daily Presidential Tracking Poll on January 17, Trump’s total approval is at 49 percent. What was Obama’s approval number exactly eight years ago? He cruised to reelection against the hapless Mitt Romney, even though Romney was a far more formidable candidate than any of the remaining lightweights in the current Democrat field.

Eight years ago, Obama’s total approval was at only 46 percent, 3 points less than the current “existential threat to civilization” in the White House. How could this be? Obama was adored by the media and treated to virtually nonstop positive reporting, quite the opposite of President Trump. Big media ignored myriad Obama era scandals and instead promoted the Sleepy Joe Biden malarkey of “Not a hint of a scandal” during their time in power. That assumes Joe remembers which president he served under as vice-president.

Trump critics don’t like Rasmussen polling. We have not yet heard Rachel Maddow claim that Rasmussen is under Russian control, even though both begin with the letter “R”, but Nate Silver of the progressive FiveThirtyEight blog thinks Rasmussen is biased toward conservatives and Republicans.

Then let’s get a second opinion, as we often do for medical diagnoses. Gallup hasn’t been accused of being an arm of the Republican Party or the Kremlin. They have their own Presidential Approval Ratings poll with the latest approval rating for President Trump at 45 percent. Not bad but still below 50 percent.

What were the approval numbers for The One, exactly eight years ago? President Obama, in December 2011, only had a 43 percent approval, two points below Trump.

Gallup surveys are based on “random digit dialing telephone samples” which may include anyone from a likely voter to someone visiting from Wakanda. Rasmussen, on the other hand, surveys “likely US voters”, a far different and more representative sample.

Interestingly Gallup also notes, “Trump approval more stable than approval for prior presidents.” This means that Trump’s base isn’t going anywhere and that’s the only hope the Democrats have of beating him next November, separating Trump from his supporters. Impeachment hasn’t worked. Complaining about his tweets or how many scoops of ice cream he gets hasn’t diminished his support either.

If anything, his base is growing. Trump campaign officials observe, “That roughly a quarter of those who attend his rallies identify as either a Democrat or an independent voter.” Is there anything similar on the Democrat side? How many Republicans are attending Joe Biden’s living room sized rallies?

Other polling winds are blowing in Trump’s direction. Three recent polls, Emerson, Marist, and Rasmussen, show President Trump with 30 plus percent support among black voters. This doesn’t mean Trump will get 30 percent of the black vote on election day, but suppose he gets half of that. Historically GOP presidential candidates have averaged 9 percent of the black vote. Bump that to 15 percent and expect long faces and tears at CNN on election night.

An axiom in life for explaining why people do things is to “follow the money”. Does “money talk” about the upcoming presidential election?

Predictit, a stock market of sorts for buying shares “for or against an event taking place” is a way to “follow the money”. When buying shares in, “Who will win the 2020 US presidential election?” Trump leads the field, bigly.

Trump is at 50 cents, with Biden and Sanders tied at 22 cents, Bloomberg at 7 cents and Warren and Buttigieg tied at 5 cents. Perfect, an Indian head nickel for Pocahontas. Putting money where their mouths are, investors believe Trump will win reelection.

Predictit is just individual investors. What about the big money of Wall Street? They are even more bullish on Trump winning reelection, “Goldman Sachs surveyed dozens of its clients and found that 87% expect President Trump to win the election this year.”

Remember that polls reflect opinion today and that the only poll that matters is on election day next November. These are also national polls and the election is decided by 50 separate state elections, not one national election. But the numbers are favorable, especially given the headwinds Trump is sailing into.

The Senate impeachment will likely deflate Democrats even more. Trump knew this was coming and has planned the ultimate reality show with witnesses, revelations, declassifications, and indictments, all timed for the upcoming election season, a trap Democrats merrily strolled into.

This will play out on his terms, though it is hard for so many of us to be patient, continuing to wait for promises of “pain is coming.” As the show plays out, expect his poll numbers to pop even further. Tune out the cable news naysayers and enjoy the show.