Polling Data the Media Doesn’t Want You to See

Polls are designed to reflect the opinions of a group of people at a moment in time. A small sample of individuals is asked for its opinion regarding a particular issue, and hopefully this small sample is representative of the larger population.

In the world of COVID-19, testing is a type of poll. A small group of people are tested to see if they have been exposed to the virus, allowing extrapolation to the larger population. If the sample skews toward the young and healthy or the old and infirm, the results won’t be applicable to the wider population.

Similarly, public opinion polls require representative samples if they have any hope of describing the larger population. For example, asking people in Boulder or Ithaca what they think of President Trump will produce far different results than the same poll in Fargo or Pensacola.

With a presidential election less than half a year away, polls will once again be a news staple. If the polls reflect the beliefs and wishes of the media, expect to see them on the front page of newspapers and leading the evening news. If the polls are contrary to media desires, the polls will be buried.

An example is this headline, from Townhall but not from CNN, “New CNN poll shows Trump crushing Biden in swing states.” CNN presented the poll results with a different spin, “Biden tops Trump nationwide, but battlegrounds tilt Trump.”

Same poll, same results, but one reveals Trump “crushing,” while the other one simply “tilts.” In fact, CNN buried the poll results on their homepage because they apparently didn’t like the results.

Let’s look closer at the CNN poll. The poll was commissioned by CNN but was conducted by SSRS, “an independent research company.” It wasn’t actually Don Lemon and Jim Acosta on the street corner asking passersby who they favored in the 2020 presidential election.

The poll sample is important. Oversampling Democrats will skew the results in favor of the Democrat candidate. In this poll, 34 percent identified as Democrat while only 26 percent described themselves as Republican, an eight-point difference. Imagine the results if those percentages were flipped.

They also surveyed registered, not likely, voters. Given that only slightly more than half of eligible voters actually voted in the 2016 presidential election, this too is not a representative sample.

The CNN poll, with their Democrat oversampling, showed voters nationally backing Biden over Trump by 51 to 46 percent, a five-point difference, less than the eight-point difference in party affiliation.

A nationwide poll is irrelevant in a presidential election because of the Electoral College. Instead there are 50 state elections taking place, not a national popular vote, to the consternation of many on the political left.

A presidential election is decided by a handful of “battleground states” that tend to swing red or blue, depending on the election cycle. An opinion poll in New York or California is irrelevant as it’s a foregone conclusion that the Democrat will win. The margin doesn’t matter as the electoral votes will be the same.

In battleground states, Trump leads Biden by 52 to 45 percent, a seven-point margin. Add the eight-point difference in party affiliation of those polled, and Trump’s lead could potentially be 15 percent.

Some other interesting tidbits are hidden in this poll. The economy typically predicts the next president, as USA Today notes. The U.S. economy is in the toilet these days due to the Wuhan virus causing a national shutdown. But as The Washington Post begrudgingly admits, “Americans have an increasingly dismal view of the economy, but they don’t blame Trump.”

In the CNN poll, Trump holds a 12-point lead over Biden when the survey asked, “Who they trusted most to handle the economy.” That’s up from only a four-point margin last month.

Sharpness and stamina favor Trump by 49 to 46 percent. Even that is suspect as Trump holds daily briefings, sparing with a hostile media for well over an hour, while Biden can’t get through a fawning five-minute interview from his basement, with notes and a teleprompter, without losing his train of thought or saying something absurd.

For another perspective, look at Rasmussen, the most accurate pollster in the 2016 presidential election. They survey likely voters, rather than simply registered or eligible voters. In their Daily Presidential Tracking Poll, Trump, on May 15, had a 49 percent total approval rating, compared to 47 percent approval for President Obama exactly eight years ago. 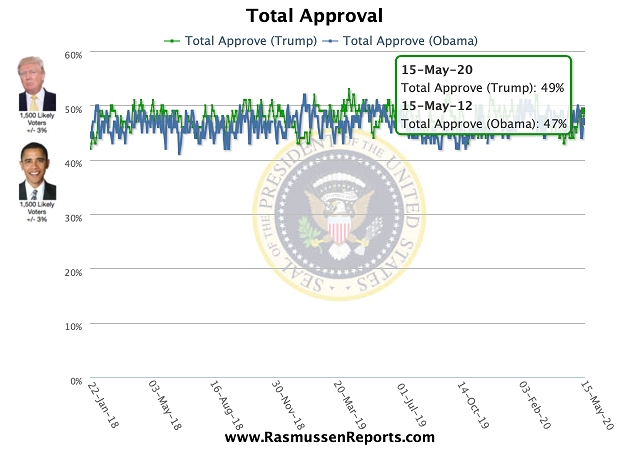 Trump is dealing with an economic calamity not seen since the Great Depression, the Inside-the-Beltway deep state still trying to overturn the last election and an almost universally hostile media. Compare that to Obama, cruising to reelection against the hapless Mitt Romney, fanned on by an adoring media and virtually no Republican opposition. Yet Trump has slightly higher approval ratings than Obama.

For another opinion, look at PredictIt where voters can put their money where their mouth is and actually bet on the electoral outcome. Trump is ahead of Biden by 50 to 44 cents.

Finally remember that polls are a snapshot in time, with the only poll that matters being on Election Day. Also, don’t forget how wrong most polls were in 2016, predicting a Clinton landslide that never materialized.

Brian C Joondeph, MD, is a Denver based physician and freelance writer whose pieces have appeared in American Thinker, Daily Caller, Rasmussen Reports, and other publications. Follow him on Facebook,  LinkedIn, Twitter, and QuodVerum.