Impeachment is Getting Boring

If you watch cable or network news, all you hear about is impeachment. To the talking heads on CNN and MSNBC, it’s as if it already happened. Reps Pelosi, Schiff and Nadler speak as if it’s a foregone conclusion, and shed crocodile tears being “heartbroken and prayerful” over the process.

The fact is, an impeachment inquiry has yet to begin. Opening such an inquiry would require a full House vote, making vulnerable representatives in districts President Trump won handily in 2016 go on record in favor of removing a duly elected president for the high crime of doing his job.

A formal impeachment inquiry also gives Republican representatives subpoena power, something the Democrats don’t want as many inconvenient facts may emerge, such as Rep Adam Schiff being a fact witness in the actual impeachment process. What did Schiff know and when did he know it about the Ukraine whistleblower?

CNN is giddy over impeachment, especially after two years of telling its handful of airport viewers that, “The walls are closing in on Trump” over the nothingburger Mueller investigation and report. Left with egg on their faces, they want nothing better than to see Trump impeached and removed from office, affirming their ability to create a presidency, as in Obama, and destroy a presidency, as in Trump. 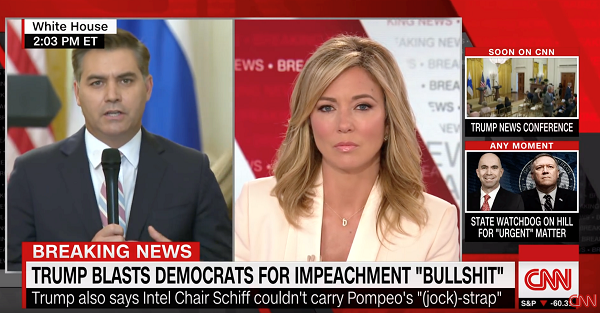 CNN ran a headline, “Trump's impeachment polling is historically unprecedented” followed by a lead sentence, “The poll numbers are in on impeachment, and it's not good news for President Donald Trump.”

CNN claims, “Americans are more eager to impeach Trump now than they were at similar points in the impeachment sagas of Bill Clinton and Richard Nixon.” Are they really?

Polls are different now than 20 or 30 years ago, a time when they were used to reflect, rather than shape, popular opinion. CNN makes this claim.

In an average of polls taken since House Speaker Nancy Pelosi announced a formal inquiry last week, 51% support an impeachment inquiry. A minority, 44%, are against it.

What polls are they citing? This is master list of recent polls CNN refers to. Let’s look at a few.

Huffington Post surveyed 1000 US citizens, not likely voters, September 30 – October 1. This is relevant since only about half of eligible voters actually vote in elections. The poll reported that President Trump should be impeached by a 44 to 40 percent margin. Yet their survey population was 36 percent Democrat and only 24 percent Republican, a 12-point sampling difference, three times larger than the poll margin.

If you conduct such a poll in downtown Denver or Seattle, you would get a similar result, but that’s not a true survey of America.

The Economist/YouGov Poll from September 28 – October 1 also surveyed US citizens, not likely voters. Their survey sample was also weighted Democrat, skewing the results, with 53 percent Democrat and only 36 percent Republican, 17-point difference. Not surprisingly, the survey population thought the House should try to impeach Trump by a 44 to 37 percent margin, less than half the difference compared to party affiliation.

Let’s look at one more poll, from Monmouth University from September 23-29. The sample was better than the above two polls, favoring Democrats by only four points, 30 percent Democrat and 26 percent Republican. Such a sample produced a different result too. When asked if President Trump should be impeached and removed from office, 44 percent said yes compared with 52 percent saying no.

Interestingly in this survey, President Trump had a 41 percent approval rating compared to only 21 percent for Congress. And who is the face of Congress these days? Those braying loudest for impeachment.

Rasmussen, the most accurate pollster in the 2016 election, surveys likely voters as opposed to eligible voters, a more meaningful sample. In their Daily Presidential Tracking Poll, Trump is at 48 percent total approval as of October 4, compared to Obama at only 44 percent at the same point in his presidency. This is despite mostly favorable media coverage of Obama and virtually entirely negative coverage of Trump. And Obama won reelection easily in 2012. 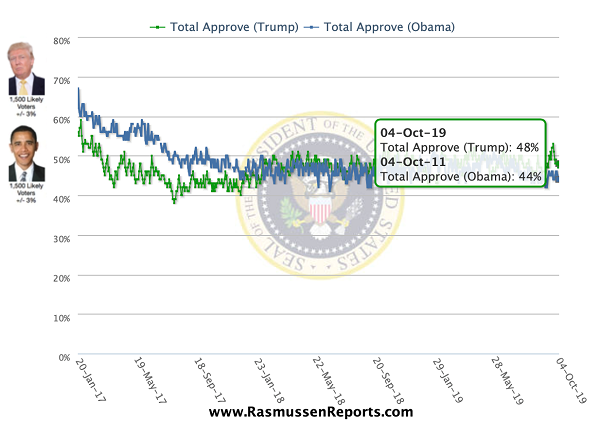 For those who don’t trust Rasmussen, another survey released last week echoed Rasmussen, “President Trump’s approval ticked up to 49 percent — its highest mark this year, according to a new Hill-HarrisX survey released on Wednesday.”

Endless impeachment talk may generate ratings for failing cable news networks and newspapers, but it does not have the popular support the Democrats desire or need to make it work. Instead it is just the latest scheme to bring down the President.

Famous NeverTrumper John Kasich confirmed the lack of interest in impeachment beyond Beltway newsrooms, “But the question is, where are the people? I’m out here in Ohio, I’m finally back in the heartland. There’s nobody talking about this.”

Impeachment is a political, not a legal, process. High crimes and misdemeanors are in the eye of the beholder. President Trump conducted normal presidential communications with foreign leaders, discussing issues of corruption affecting both countries. This is his job, mandated by a 1988 treaty, originating in Joe Biden’s Senate and signed by Bill Clinton, and would only be a high crime if ignored, as it was during the Obama administration.

But the Democrats are desperate. Rep Al Green acknowledged the real motivation behind the impeachment talk, "I'm concerned if we don't impeach this president, he will get re-elected.”

Meanwhile Americans are becoming bored and annoyed with House Democrats doing nothing about real problems facing the country, instead focusing their entire Congressional agenda on overturning the 2016 election.

In this case, Rep Alexandria Occasional-Cortex has it right, saying about impeachment, “I think the whole thing is boring." Most Americans will agree with her this once. Tone deaf Congressional Democrats forge on at their own peril.