Deck the Polls with Boughs of Folly

Christmas is rapidly approaching. Traditional Christmas carols have been replaced by insipid pop ballads played incessantly on “holiday” radio stations. As “Deck the Halls” is now politically incorrect with its reference to donning one’s gay apparel, I took some liberty with the song title to review recent opinion polls.

These polls foreshadow ghosts of elections past, with a potential repeat of 2016. This was the election that virtually all pollsters predicted would be won by Hillary Clinton in a landslide. Some, like the New York Times, held fast to this view even on election night when the election was essentially over.

In mid-December, we have presidential polls and impeachment polls. Both portend a lump of coal in Democrat stockings, not only this coming Christmas morning, but for the next five such Christmases through President Trump’s second term.

Starting with the presidential race, Real Clear Politics shows Joe Biden with a healthy lead over his Democrat rivals. This is just who the Democrats want as the face of their party. The guy bragging about children rubbing his hairy legs, then sitting on his lap, and Rudy Giuliani having “more than you can imagine” after his recent trip to Ukraine.

Now we hear that Creepy Joe is about to be a grandfather twice, once from son Hunter’s Arkansas baby mama, who convinced a judge to order the release of Hunter’s tax returns, and now from Hunter’s actual wife, currently in her second trimester of pregnancy. I’m sure Joe will be having airport tarmac meetings with Bill Clinton to discuss grandchildren and his family’s financial ties to Ukraine.

A recent Politico/Morning Consult poll found a, “Majority expect Trump to win in 2020.” A political scientist claims, “Trump impeachment would guarantee his re-election in 2020.” Yet the presidential election is still a collection of 50 state elections, as the inconvenient Electoral College dictates.

What about the battleground states where the election will actually be decided? RCP has Trump beating the remaining Democrat candidates in Wisconsin and Iowa in their recent polling.

Firehouse Strategies, in their December poll of battleground states, concluded, “As impeachment moves ahead, President Trump well-positioned against leading Democratic contenders.” These contenders include Biden, Warren, Sanders, Buttigieg and Bloomberg. In Michigan, Pennsylvania and Wisconsin, Trump leads all five of his potential rivals.

Firehouse also found that compared to last spring when Biden was favored over Trump in these three states, now Trump is the favorite. This trend is likely to continue the more Biden opens his mouth and his family’s dirty laundry is hung in the sunshine of scrutiny.

In recent elections, black support varied from Reagan getting nine percent to Romney at six percent, McCain at four percent, and Trump at eight percent. Imagine if Trump doubled his black support on Election Day, much less quadrupled it as the polls suggest might be possible.

How is impeachment polling in the midst of congressional Democrats’ full court press to nullify the results of the last election based on nonexistent high crimes and misdemeanors?

According to Quinnipiac University’s most recent poll from December 10, impeachment is not as popular as CNN and MSNBC anchors believe it to be. “Today’s poll is the first time since House Speaker Nancy Pelosi announced the inquiry that more than half of voters say that Trump should not be impeached.”

FiveThirtyEight has been tracking support for impeachment which for the past six months has been relatively stable. There's been a 50-50 split among the surveys they have been tracking, certainly no public groundswell of support necessary to impeach a popular and successful president.

If you don’t like the opinion polls, ask members of Congress instead how they feel about impeachment. Democratic New Jersey Rep. Jeff Van Drew informed his staff on Saturday about his intention to switch parties. If other Democrats join the congressman, Republicans may win back the House before the next election.

Two impeachment articles were voted out of the House Judiciary Committee last Friday on a party line basis, with zero Republican support. Remember what the Democrat grand inquisitors once said about impeachment being bipartisan?

Pelosi: “Impeachment is so divisive to the country that unless there’s something so compelling and overwhelming and bipartisan, I don’t think we should go down that path, because it divides the country.”

Schiff: “If the evidence isn’t sufficient to win bipartisan support for this, putting the country through a failed impeachment isn’t a good idea.”

Nadler: “Impeachment should not be partisan.”

That was then, and this is now. As the perpetually angry-looking Rep. Al Greene said last spring, "I'm concerned if we don't impeach this president, he will get reelected.”

The FiveThirtyEight breakdown of impeachment support by party demonstrates the partisan divide with 85 percent Democrat support for impeachment and less than 10 percent Republican support. This is hardly bipartisan. And more importantly, only 43 percent of independents favor impeachment.

Overall support for the president remains strong, as Rasmussen points out. In their Daily Presidential Tracking Poll, President Trump is at 49 percent total approval on December 18, compared to only 47 percent total approval for President Obama exactly eight years ago. This is despite the single-minded focus of Democrats and the media to remove Trump from office compared to a lapdog Republican Congress and fawning media when Obama faced reelection.

Rasmussen also found that 47 percent of likely voters thought that impeachment and removal of President Trump would be bad for the economy, compared to only 29 percent who thought it would be good. As Christmas season rolls around, with many American workers having fatter paychecks and Christmas bonuses, along with rising 401K plan balances, do voters really want to toss all that away because Trump tweets too much or calls out on Twitter a snotty 16-year-old self-proclaimed climate expert?

Instead look at the enthusiasm at Trump rallies. His last one, in Hershey Pennsylvania, a state typically won by Democrats until Trump came along, had a long line of hopeful attendees standing in the rain hours before the rally. Even one of NBC’s hyperpartisan hacks, Katy Tur, commented that this was, “One of the biggest rallies I’ve ever seen.” 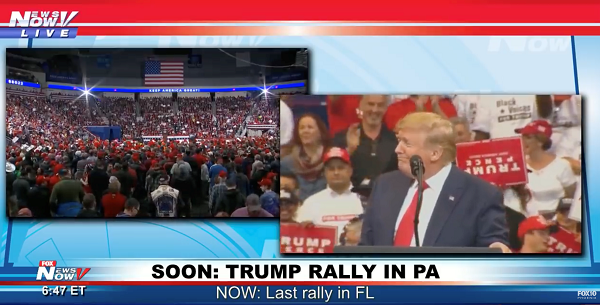 There was similar anti-establishment enthusiasm recently across the pond in the UK. Despite pollsters predicting a hung parliament, Boris Johnson won a parliamentary majority not seen since the days of Margaret Thatcher. CNN had to begrudgingly admit, “Boris Johnson went from political caricature to delivering a Margaret Thatcher-like election win.”

Does that sound familiar? Wasn’t the entire US media apparatus saying the same thing after Trump’s 2016 victory? Their polls in 2016 were as wrong as they were in the UK. They use polls to show the results they want, to shape public opinion rather than reflect it.

Don’t be surprised if the next US election mirrors this past week’s UK election, the brash guy with wild blonde hair and a big mouth carpetbombing Democrats and the media.

As the media decks their polls with boughs of folly, history may repeat itself once again. On election night 2020, expect a silent night for Democrats and the media while Trump and his supporters get another chorus of jingle bells.