Republican Donald Trump picks up 38% of the vote against Democrat Hillary Clinton, who draws 36% support. A new Rasmussen Reports national telephone survey finds a sizable 22% would prefer some other candidate given this matchup, while five percent (5%) are undecided at this point. (To see survey question wording, click here.)

Trump draws support from 65% of Republicans in a matchup against Clinton, while Clinton is backed by 70% of voters in her party. Interestingly, 24% of GOP voters would prefer some other candidate in a Trump-Clinton matchup, compared to just 14% of Democrats.

Among voters not affiliated with either political party, it’s Trump 37%, Clinton 25%. But 29% of these voters prefer some other candidate and 10% are undecided.

When matched against GOP candidate Carly Fiorina, Clinton picks up 40% of the vote to Fiorina’s 34% among all voters. Twenty-one percent (21%) would choose some other candidate, while five percent (5%) are not sure.

Fiorina, the former Hewlett-Packard CEO who has turned in strong debate performances thus far, is now seen as the likely nominee by 41% of Republican voters. But just nine percent (9%) say Fiorina is Very Likely to capture the nomination. 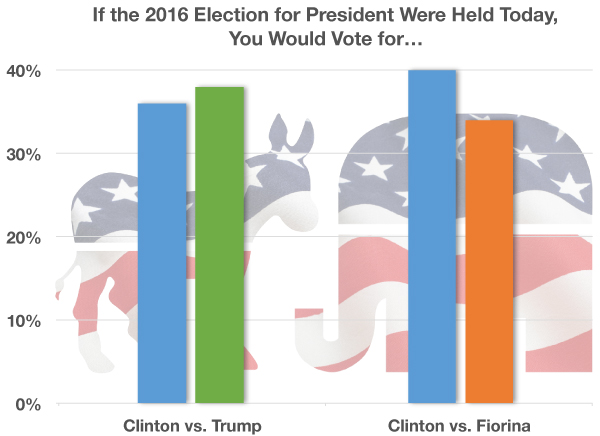 The survey of 1,000 Likely Voters was conducted on October 18-19, 2015 by Rasmussen Reports. The margin of sampling error is +/- 3 percentage points with a 95% level of confidence. Field work for all Rasmussen Reports surveys is conducted by Pulse Opinion Research, LLC. See methodology.

We asked voters last month which of the frontrunners they trust more on key voting issues. Trump holds a double-digit lead in voter trust when it comes to the economy and immigration and is slightly ahead in the area of national security. Clinton holds small leads on social policy and the environment.

Fiorina edges Clinton 34% to 29% among unaffiliated voters, but another 26% of those voters would prefer to vote for someone else.

While women give Clinton a 42% to 32% edge against Fiorina, the Clinton-Trump matchup is much tighter. Thirty-seven percent (37%) of women support Clinton against Trump, who picks up 34%.

Men give Trump a 41% to 34% edge over Clinton but are evenly divided between Fiorina and Clinton.

Voters under 40 give Clinton a double-digit edge against Trump, but older voters prefer Trump by narrower margins. Clinton enjoys an even wider lead over Fiorina among younger voters, but those 40 and over are closely divided between the two.

Despite the increasing legal and political questions about her use of a private e-mail server during her tenure as secretary of State, Clinton sailed through the first debate unchallenged, unscathed and unrepentant.

But more voters than ever are convinced that the 2012 incident in Benghazi, Libya in which the U.S. ambassador was killed on her watch will hurt the former secretary of State's bid for the White House.

Voters have a major decision coming up: Whom to elect as the next president of the United States. They’ll have to sift through hundreds of conflicting news stories, debate after debate, campaign tours and press conferences. It’s a lot to take in, so how do voters decide?

The survey of 1,000 Likely Voters was conducted on October 18-19, 2015 by Rasmussen Reports. The margin of sampling error is +/- 3 percentage points with a 95% level of confidence. Field work for all Rasmussen Reports surveys is conducted by Pulse Opinion Research, LLC. See methodology.

What America Thinks: Why We Vote The Way We Vote