A Commentary By Isaac T. Wood
in Political Commentary

The last time a Democrat lost a special election for a U.S. House seat, George W. Bush was still president and gas was almost $4 a gallon. It was way back on May 3, 2008 when Hillary Clinton was still battling Barack Obama tooth-and-nail for the Democratic presidential nomination.

Even though Democrats lost that special election, when Republican Steve Scalise succeeded the new Louisiana Governor Bobby Jindal in Louisiana’s 1st District, their number of total House seats stayed unchanged since it was held by a Republican to begin with. The last time a Democratic seat was lost in a House special election, George W. Bush had only been an office for five months. 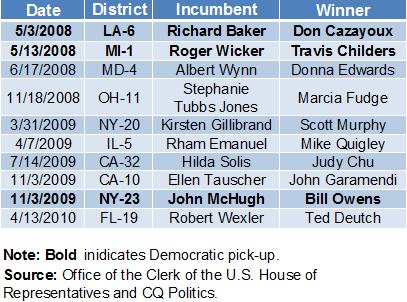 Next up on the special election docket is a trio of races which give the Republican Party a near certainty to end the Democrat’s streak and an outside chance to start one of their own.

May 11: GA-9
Nathan Deal (R) resigning to run for governor

The special election here is a near certain win for the GOP, due merely to the ruby Red makeup of the electorate. In fact, it was the third most Republican House district in the country in 2008, with McCain beating Obama 3-to-1 in the presidential race. In fact, Democrats were left without even a token candidate for a time after a local Democratic Party chairman dropped out. Following a two week hiatus from the race, Mike Freeman has jumped back into the fray, but is unlikely even to make the runoff with a slew of more well known and funded candidates. Instead, either of two Republican former state legislators, Lee Hawkins or Tom Graves, will likely take the seat, with a runoff scheduled for June 8 if necessary.

This district defines battleground in a unique way. Of all the 435 House districts across the country, Pennsylvania’s 12th District was the only one to support McCain in 2008 after being carried by John Kerry in 2004. While it may be strange to consider as a battleground a seat held by a Democratic incumbent for 18 terms and where Democrats hold a two-to-one voter registration advantage, Murtha eked out a 122 vote victory to capture the seat in his first election and the area has drifted from the national Democratic Party in recent years.

The special election has become the clearest contest this cycle between the two parties’ respective congressional campaign committees. Both sides have hit the opposition’s candidate with highly negative ads and national issues have become local. The district is coal country and recent Democratic attempts at stemming climate change have been met with a combination of skepticism and downright hostility. Democratic nominee Mark Critz is a former staffer of John Murtha who has had to distinguish his position against the cap-and-trade bill from that of his boss, who voted for it.

In a quirk of history, the man Republicans are relying on to end the Democratic special election streak here is businessman Tim Burns, who shares a name with the second-place finisher in the last special election Republicans won, back in May 2008. This Tim Burns has a difficult task ahead as he attacks Critz for his work in Congress but tries to tiptoe around who he did that work for, as Murtha’s three decades in office and recent passing make him still a popular figure.

The polling in this race is neck-and-neck with both sides touting favorable surveys but almost every result within the margin of error. With national Democrats and Republicans each dropping around half a million dollars into the race, both parties think they can win and understand how valuable that victory could be.

May 22: HI-1
Neil Abercrombie (D) resigning to run for governor

Voting has already begun in Obama’s home district of HI-1. With the state budget in dire straits, election officials opted for voting by mail and ballots have already been sent to voters. In addition to that unusual procedure, the results here will be defined by the three-way race without a runoff to clarify the choice between them. Obama carried 70% of the vote in this district last year, but in a three-way race with two A-list Democratic candidates even that may not be enough support to salvage a victory.

Republicans are pinning their hopes on Honolulu city councilor Charles Djou who has been leading both Democrats in recent polling. Democrats have been divided between former Rep. Ed Case, who previously represented the state’s other congressional district, and state senator Colleen Hanabusa. Case is seen in Washington, DC as the stronger candidate but has been hamstrung by his previous primary bid against Senator Daniel Akaka. As a result of that decision, both Hawaii senators are supporting Hanabusa and show no sign of switching to Case even as polls show that a divided Democratic base will likely elevate Djou to victory.

Obama has recorded a telephone message for voters in the district urging a vote for “a Democrat” but declining to take sides between Case and Hanabusa. Privately, the White House believes Case has the better chance for victory, but many believe it is too late to engineer a victory by endorsing one candidate over the other because the mail-in voting system means many have already voted. National Democrats are reduced to running negative ads bashing Djou and keeping their fingers crossed for a minor miracle.

Why does this all matter? After all, special elections are notoriously low turnout affairs and only take place in one congressional district, which represents less than a quarter of a percent of the nation’s population. Some recent history, though, shows how powerful these elections can be in providing momentum for the winning party, and sucking the wind out of the sails of the losers.

Republican Scott Brown’s special election victory at the Senate level this past January was a huge blow to Democrats, especially given that it took place in liberal Massachusetts. Immediately the GOP began crowing about a party resurgence, motivating its donors and supporters while depressing and frustrating a somewhat unenthusiastic Democratic base. The media furor over Democrats losing “the Kennedy seat” will certainly be repeated should Democrats surrender “the Obama seat” in Hawaii. It should be noted though that a House seat is not a Senate seat and Brown won an absolute majority to get three years of Ted Kennedy’s seat. This Republican winner in Hawaii will be hard pressed to hold onto the seat in November.

A similar situation exactly two years ago set the scene for big Democratic victories in the fall, as two surprising House special election wins deep in enemy territory energized Democratic donors, volunteers, and candidates. If Republicans flip the HI-1 seat which Obama carried with 70% of the vote just a year and a half ago and capture the PA-12 seat which had been held by a Democrat for 37 years, it could propel them along a parallel path towards a promising midterm election this November.

Isaac T. Woods is the House Race Editor for Sabato's Crystal Ball at the University of Virginia.