Trump and his Supporters are the Real Whistleblowers

“Whistleblower” is the media’s word of the week. They still working tirelessly to overturn the 2016 election. Unfortunately, it’s the wrong word to describe the deep state operative accusing President Trump of “Collusion – Part Two,” namely conspiring with Ukraine to rig the 2020 election. Instead of whistleblower, the proper term is gossiper, as this person filed a complaint, likely written by others, about something he or she had been told, but had no firsthand knowledge of.

Rush Limbaugh, on his radio show this past Friday, made the case that Trump is the real whistleblower in Washington, DC. I contend that his supporters are as well, as they are by extension, part of the Trump movement, taking slings and arrows from friends and family over their steadfast support of Trump’s efforts to drain the swamp.

Rush played excerpts from a speech that candidate Trump gave on October 24, 2016, just a few weeks before the election. One has to search diligently for this speech as it is well camouflaged by social media search algorithms.  Many call this, “The speech that got Trump elected.” Those familiar with the mysterious Q, who has gone silent for the past two months, have heard multiple references to this speech. If you are feeling down over what you hear endlessly on cable news, take five minutes and listen to the speech for an uplifting jolt of covfefe. 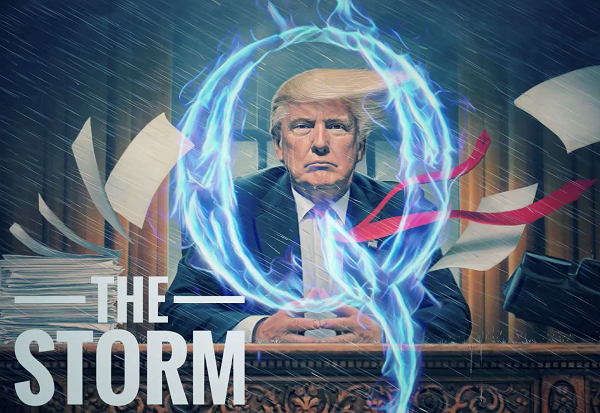 Trump’s speech is the ultimate whistleblower manifesto, laying out his case for draining the swamp. From the speech transcript, Trump explains the “corruption and other wrongdoing” that he plans to blow the whistle on.

Trump then goes on to name names.

The Clinton Machine is at the center of this power structure. We’ve seen this firsthand in the WikiLeaks documents in which Hillary Clinton meets in secret with international banks to plot the destruction of U.S. sovereignty in order to enrich these global financial powers.

Not mentioned are the Obamas and Bidens, as well as many other Democrats, and some Republicans, as branches of the Clinton power tree. Despite three years of Trump’s presidency, the Clintons have not been held to account for their decades of corruption and criminality. In fact, Hillary Clinton is stumbling back into the spotlight with a string of media appearances next week on friendly television shows like CBS Sunday Morning, Stephen Colbert, and The View.

One might think she wants to take a third bite of the apple, trying for the Democrat nomination for president. Why not? As a presidential candidate, any criminal actions against her would be seen as overtly political, giving her protection against future Spygate or email prosecutions.

As the Democrats and their media allies attempt to impeach President Trump over an innocuous phone call to the Ukrainian president, Biden’s pay-to-play corruption is being exposed. Sleepy Joe’s fortunes are fading as Rasmussen has Trump ahead of Biden now by 47 to 43 percent.

Number two Elizabeth Warren has her own problems as fat cat Democrat Wall Street donors warn, “We’ll sit out, or back Trump, if you nominate Elizabeth Warren.” Bernie Sanders would fare no better as he is just a crazier version of socialist Warren. The remaining candidates are footnotes.

Who would get in the way of Hillary if she wanted to run again? Ask Jeffrey Epstein what happens to those threatening the Clintons. Hillary also has the media on her side, another group Trump is blowing the whistle on.

The most powerful weapon deployed by the Clintons is the corporate media. Let’s be clear on one thing: the corporate media in our country is no longer involved in journalism. They are a political special interest, no different than any lobbyist or other financial entity with an agenda. And their agenda is to elect the Clintons at any cost, at any price, no matter how many lives they destroy.

The bigger the target the whistleblower threatens, the more the pushback. The whistleblower has much to lose and hence they are afforded protections. Not so for President Trump. As he blows the whistle, Democrats, the media, and NeverTrump Republicans, such as recent losing presidential ticket Mitt Romney and Paul Ryan, fight back.

Trump knows this and continues a battle that mere mortals would have given up or never undertaken in the first place.

But I take all of these slings and arrows for you. I take them for our movement, so that we can have our country back. Our great civilization, here in America and across the civilized world, has come upon a moment of reckoning.

Whistleblowers can choose to stay silent, to look the other way and avoid the scrutiny and castigation that follows blowing the whistle. Not Trump.

I didn’t need to do this. I built a great company, and I had a wonderful life. I could have enjoyed the benefits of years of successful business for myself and my family, instead of going through this absolute horror show of lies, deceptions and malicious attacks. I’m doing it because this country has given me so much, and I feel strongly it was my turn to give back.

This is no ordinary whistleblower action against a crooked company, but an action against the financial and political forces of the entire world. It’s a world war, without the soldiers and bombs. Actor Jon Voight recently posted a video on Twitter making the point, “War. This is war against truths. This is a war against the highest noble man who has defended our country and made us safe and great again.”

Trump knew this before he was even elected. In his famous October 2016 speech, he acknowledged the reality.

For them, it is a war – and for them, nothing is out of bounds. This is a struggle for the survival of our nation. This election will determine whether we are a free nation, or whether we have only the illusion of Democracy but are in fact controlled by a small handful of global special interests rigging the system.

It seems as if the President is alone in this battle as most Congressional Republicans are sitting on their thumbs, afraid to defend Trump. But he is not alone. At least 65 million Americans are also whistleblowers, using their voices and votes to expose the corruption. Trump knows he needs help in this battle.

The storm has arrived. But Trump is prepared. He knew this was coming long before he was elected and before he even announced his candidacy for the Republican nomination. He knew what blowing the whistle on decades of establishment corruption would mean for him and his family. Yet went forth and continues to this day.

Last week at the United Nations he spelled it out, “The future does not belong to the globalists. The future belongs to patriots.” Before he was elected, he made the same declaration.

Trump is blowing the whistle on decades of global corruption at a level few of us can fathom. The left is in a panic because he is winning. Enjoy the show.