Belief that Donald Trump is the likely Republican presidential nominee has soared to its highest level ever and matches perceptions that Hillary Clinton will be the Democratic standard-bearer in the fall.

By comparison, 91% of Democrats – and 84% of all likely voters - see Clinton as the likely Democratic nominee.

Among all likely voters, 80% view Trump as the likely Republican nominee, with 55% who say it is Very Likely. This is up from 71% and 39% respectively a week ago and also are new highs for both numbers. In mid-March, a previous high of 46% said Trump was Very Likely to win the nomination. 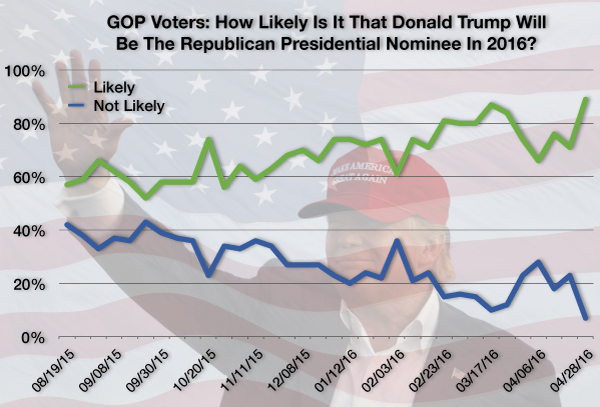 To show how far Trump has come in a presidential bid that most considered highly improbable at the time, just 25% of Republicans – and 17% of all voters – said he was Very Likely to be the nominee when Rasmussen Reports first began the Trump Change survey last August.

Just seven percent (7%) of Republicans and 13% of all voters say Trump is unlikely or Not At All Likely to be the Republican presidential candidate this fall.

The survey of 1,000 Likely U.S. Voters was conducted on April 27-28, 2016 by Rasmussen Reports. The margin of sampling error is +/- 3 percentage points with a 95% level of confidence. Field work for all Rasmussen Reports surveys is conducted by Pulse Opinion Research, LLC. See methodology.

Trump and Clinton are now tied at 38% apiece among all likely voters, but 24% say they will vote third-party or stay home if those are the major-party nominees.

Men are much more confident than women that Trump is Very Likely to win the nomination. But voters of all ages are now in general agreement about his chances to come out on top.

Blacks are much more skeptical than whites and other minority voters that Trump is the likely GOP candidate.

Seventy-five percent (75%) of both Democrats and voters not affiliated with either major political party agree that Trump is likely to be the nominee, but Democrats feel more strongly that his nomination is Very Likely.

Following Tuesday’s primaries, it’s moment of truth time for the #Never Trump crowd: Do they want four years of Clinton in the White House or a Republican president they strongly disagree with?

Trump’s remaining GOP opponents, Ted Cruz and John Kasich, are counting on Tuesday’s Indiana primary to be their firewall to stop his candidacy short of the 1,237 delegates needed to be declared the nominee on the first ballot at July’s national Republican convention. Cruz and Kasich no longer have a mathematical chance of earning 1,237 delegates in the remaining state primaries, so they are pinning their hopes for the nomination on a deadlocked convention.

Earlier this month, 51% of GOP voters said the party’s nominee should be the candidate who arrives at the convention with the most delegates, but that was before Trump’s big primary wins of the last two weeks.

The surprising level of support for Trump and Bernie Sanders suggests voters in the two major parties are getting more extreme in their thinking than their respective party leaders. A sizable number of voters agree.

The survey of 1,000 Likely U.S. Voters was conducted on April 27-28, 2016 by Rasmussen Reports. The margin of sampling error is +/- 3 percentage points with a 95% level of confidence. Field work for all Rasmussen Reports surveys is conducted by Pulse Opinion Research, LLC. See methodology.