The Rasmussen Reports Immigration Index for the week of March 22-26, 2020 has dropped again - to 97.9, down from 99.6 the week before. Down for the second week in a row, the Index’s findings suggest that the coronavirus is beginning to impact attitudes about allowing newcomers into the country. 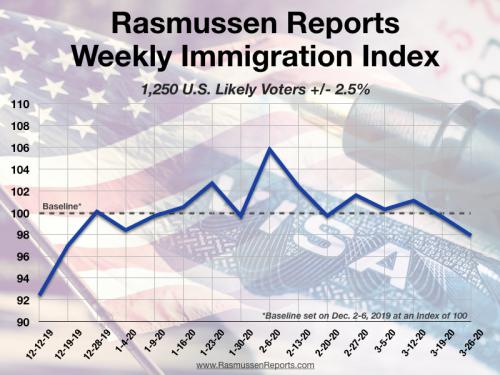 In the latest survey, 39% of Likely U.S. Voters feel the government is doing too little to reduce illegal border crossings and visitor overstays. Thirty-one percent (31%) say it is doing too much. Twenty-two percent (22%) rate the level of action as about right.

Little changed is the 68% who continue to believe the government should mandate employers to use the federal electronic E-Verify system to help ensure that they hire only legal workers for U.S. jobs. But a new low of 17% disagree, with more (15%) now undecided.

Similarly little changed from past surveys is the 58% of voters who favor giving lifetime work permits to most of the approximately two million illegal residents who came to this country when they were minors, with 33% who Strongly Favor. Thirty-four percent (34%) are opposed, including 17% who are Strongly Opposed.

But just 44% favor giving lifetime work permits to most of the estimated 12 million illegal residents of all ages who currently reside in the United States, with 20% who Strongly Favor it. Forty-nine percent (49%) remain opposed, including 30% who are Strongly Opposed. These findings also have moved little over the course of the Immigration Index’s history to date.

Voters are a little less welcoming again this week. Legal immigration has averaged around a million annually in recent years, but 50% of voters believe the government should be adding no more than 750,000 new immigrants each year, with 34% who say it should be fewer than 500,000. Thirty-four percent (34%) favor adding one million or more legal newcomers per year, including 10% who say the figure should be higher than 1.5 million. Fifteen percent (15%) are not sure.

When businesses say they are having trouble finding Americans to take jobs in construction, manufacturing, hospitality and other service work, 60% of voters say it is better for the country if these businesses raise the pay and try harder to recruit non-working Americans even if it causes prices to rise. Just 23% disagree and say it’s better for the country if the government brings in new foreign workers to help keep business costs and prices down. Seventeen percent (17%) are undecided.

Only 27% feel that Congress should increase the number of foreign workers taking higher-skill U.S. jobs. Fifty-eight percent (58%) think the country already has enough talented people to train and recruit for most of those jobs. Fifteen percent (15%) are not sure.

The two previous questions whose findings have changed little over the course of the Index to date bear close watching in the weeks ahead as the coronavirus shutdown continues to throw Americans out of work.

The survey of 1,250 Likely U.S. Voters was conducted March 22-26, 2020 by Rasmussen Reports. The margin of sampling error is +/- 3 percentage points with a 95% level of confidence. Field work for all Rasmussen Reports surveys is conducted by Pulse Opinion Research, LLC. See methodology.