Republicans feel pretty good about John Boehner’s decision to resign as speaker of the House of Representatives. Democrats are more likely to see Boehner’s resignation as bad both for the country and the GOP.

The latest Rasmussen Reports national telephone survey finds that just 14% of Likely Republican Voters think Boehner’s resignation is bad for the congressional GOP. Forty-five percent (45%) believe it’s good for Republicans in Congress, and 33% say it will have no impact.

Only 13% of Republicans believe the longtime GOP congressman’s departure is bad for the country, while 45% see it as good for America instead. Thirty-one percent (31%) feel it will have no impact.

But 20% of Democrats think Boehner’s resignation is bad for the country, and 34% say it’s bad for the GOP. Unaffiliated voters aren’t as concerned.

Among all likely voters, 39% think Boehner’s resignation is good for the country, while just 15% consider it bad for America. Thirty-two percent (32%) say it will have no impact. Fourteen percent (14%) are not sure. (To see survey question wording, click here.)

Thirty-two percent (32%) of all voters believe Boehner’s departure will be good for Republicans in Congress. Twenty-three percent (23%) disagree and think it will be bad for the congressional GOP instead. Thirty-three percent (33%) feel his resignation will have no impact.

The key question for House Republicans now is whether they want a speaker who will fight more or one who like Boehner hopes periodic strategic wins will put the party in a better place come the next election. 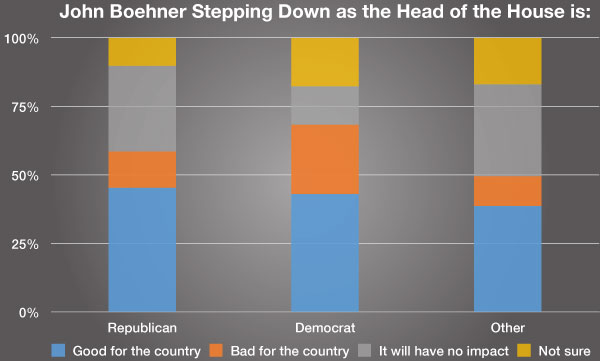 (Want a free daily e-mail update? If it's in the news, it's in our polls).  Rasmussen Reports updates are also available on Twitter or Facebook.

The survey of 1,000 Likely Voters was conducted on September 28-29, 2015 by Rasmussen Reports. The margin of sampling error is +/- 3.0 percentage points with a 95% level of confidence. Field work for all Rasmussen Reports surveys is conducted by Pulse Opinion Research, LLC. See methodology.

Just 25% of all voters have a favorable opinion of Boehner, including only five percent (5%) with a Very Favorable opinion of the Ohio congressman. Boehner has been speaker for nearly five years and a member of Congress since 1991.

No one likes the job Congress is doing, but Republicans are more critical than Democrats and unaffiliateds even though the GOP has been in control of both the House and Senate since January.

Voters under 40 are more likely than their elders to consider Boehner’s leaving as a good thing.

Most Republican voters have long felt that their congressional representatives are out of touch with the party’s base. Only 24% of Likely GOP Voters now believe Republicans in Congress have done a good job representing their party’s values. Democrats, by contrast, are much happier with their representation in Washington, D.C.

Republican voters are increasingly dissatisfied with the establishment GOP which Boehner personifies because of its perceived failure to battle President Obama and congressional Democrats over Obamacare, the president’s immigration amnesty and other major issues. This helps explain the success outsider candidates like Donald Trump and Ben Carson are having in the race for the Republican presidential nomination.

The survey of 1,000 Likely Voters was conducted on September 28-29, 2015 by Rasmussen Reports. The margin of sampling error is +/- 3.0 percentage points with a 95% level of confidence. Field work for all Rasmussen Reports surveys is conducted by Pulse Opinion Research, LLC. See methodology.