A Commentary By Tim Storey
in Political Commentary

Late last week, a state judge on Long Island in New York certified that Mineola mayor Jack Martins, a Republican, had won the race for state Senate District 7 by a mere 451 votes out of the more than 85,000 cast. With that win, the GOP took control of the New York Senate by a 32-30 majority making it the last state legislative domino to fall in the 2010 election cycle. The New York state Senate was the 20th legislative chamber picked up by Republicans in the 2010 elections. In addition to gaining new majorities in 20 chambers, Republicans won enough seats in Oregon to tie the House at 30-30. Adding insult to injury, they also took a numerical majority in the Louisiana House when a Democratic representative switched parties, leaving that chamber with 51 Republicans and 50 Democrats along with four independents. Twenty-two state legislative chambers changed majority control in the 2010 election cycle—all in the direction of the GOP.

By this point, the overused weather clichés have all been trotted out. Whether you call it a hurricane, a tsunami or a seismic shift, it was an historic election at the state level for the GOP. By adding over 720 legislative seats to their column in the past two years, Republicans easily cleared the 1994 expectations bar. In 1994, the last big wave election, they netted over 500 seats and the majority in 20 legislative bodies. There are now more Republican state legislators (3,941) than at any point since they held 4,001 seats after the 1928 election.

With bulked up numbers at the state level, Republicans are now in their best position for the looming redistricting process since the modern era of redistricting began following the U.S. Supreme Court’s landmark ruling in Baker v. Carr in 1962.

Democratic legislative candidates knew that 2010 would be a challenging year, and in a few states such as Nevada and Delaware where chambers could have flipped to the GOP given the tide, the Dems even managed to hold majorities or even gain a few seats. As Crystal Ball readers know, midterms are typically tough sledding for the party in the White House up and down the ballot. Nowhere is that trend more pronounced than at the state legislative level. Since 1902, the president’s party has now lost seats in all but two of the 28 midterm election cycles giving up an average of 416 seats.

Further complicating things for Democrats was that they were on an impressive winning streak, having added legislators to their ranks in the past three consecutive elections. As a result of the streak, they controlled just under 56 percent of all legislative seats heading into the election, a high water mark since losing 514 seats in 1994. It has been over 70 years, however, since either party gained legislative seats in four consecutive elections. In addition to the historic trends pointing to trouble for Democrats, it was a very difficult year for state budgets, leading most legislatures to make unpopular fiscal cuts, always a tough platform to run on.

In addition, there definitely seemed to be a significant “enthusiasm gap” for Democrats at the state level. About 11,000 candidates ran for the 6,115 state legislative seats that were up in 2010. About 10,000 were either Democratic or Republican. The number of candidates fielded by each party was about even, but what was striking about the candidate numbers was that there were about 50 fewer Democrats running this year than in 2008 while Republicans increased their candidate field by roughly 820 candidates over 2008. Republicans challenged more districts, knowing that they would have the wind at their backs.

Including gains in odd-year elections in four states, special election wins, and over a dozen Democratic state legislators who have switched their party affiliation in the past several weeks, Republicans netted 721 seats in the 2010 election cycle (since January of 2009). Republicans now control almost exactly 54 percent of the nation’s 7382 legislative seats that are partisan, excluding Nebraska’s nonpartisan, unicameral legislature.

What really matters, though, is getting enough seats to claim the majority in a particular legislative body. In the nation’s 98 partisan state legislative chambers, Republicans almost completely reversed their standing. Headed into the election, Democrats had a 60-36 advantage with two chambers, the Alaska Senate and Montana House, tied. When most legislatures convene new sessions in early January, Republicans will control 57 chambers, Democrats 39, and again, two will be tied, the Alaska Senate and the Oregon House.

Republicans now control the entire legislature in 25 states, 11 more than they had going in to the 2010 elections. For their part, Democrats control both houses of 16 legislatures, with eight states facing divided control of the legislature. The last time Republicans controlled this many legislatures was after the 1952 election, when they had 26. 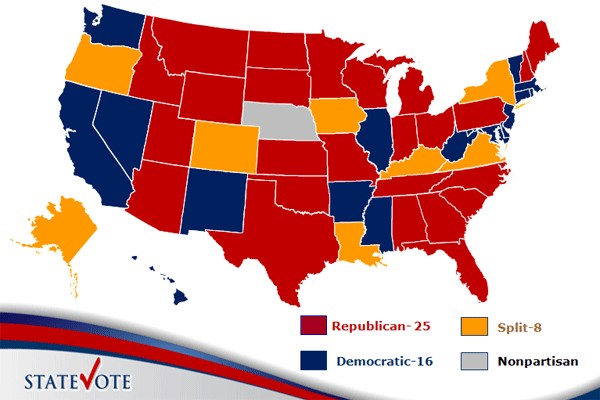 Gains in Every Region

Republicans gained legislative seats in every region of the country in 2010, led by the Northeast where they picked-up 229 seats. The numbers in the East are somewhat skewed by the New Hampshire House which has 400 members, allowing Republicans to gain 132 seats in the Granite State alone. What was probably most striking at the regional level was the symbolic tipping point that Republicans achieved in the South. For the first time since 1870, there are now more GOP legislators in the South than Democrats, punctuating a decline of Democrats in the region that has been steadily taking place since the late 1950s. Prior to 1994, only 16 years ago, there was not a single legislative chamber in the South with a majority of Republican members. Now, 19 chambers in the South belong to the GOP, including five which switched this year: the House and Senate in Alabama, the Louisiana House, and the House and Senate in North Carolina.

In addition to those five chambers, 17 other chambers saw a party control change, including the Oregon House, which went from a 36-24 Democratic advantage to a 30-30 tie. On average, 13 state legislative chambers change hands in every two-year election cycle. In this cycle, the following 21 chambers all moved to the Republican column:

Other chambers where Republicans made notable gains but fell short of winning the majority included the Arkansas House, where they added 17 seats, and the Connecticut House, where they added 15. In the Texas House, Democrats had actually hoped to win enough seats to take control, but wound up losing 24 seats in the body and now hold only 51 of the 150 total Texas House seats. The most Republican legislature is now Wyoming at 84% GOP, jumping over Utah and Idaho. Hawaii leapfrogged Rhode Island to become the most Democratic legislature and is now 87% Democrats.

In every major November regular election, legislative turnover averages about 18 percent on Election Day, mostly due to voluntary retirements. In this election, overall turnover spiked up to about 24 percent of all legislative seats. There will be a startling 1,765 new legislators in January. That level of turnover is not uncommon in the election following redistricting, but it is striking to see that high turnover in the election right before redistricting. In addition, the nation will have the most new governors in its history—28. When you combine either a new legislative majority or a new governor, there will be new leadership in either the governor’s mansion or in one of the legislative bodies in a whopping 32 states.

One of the first tasks facing all of those new leaders will be the highly political exercise of drawing new district boundaries using the 2010 Census data that will be sent to states early next year. The legal framework that regulates redistricting is extraordinarily complex and there are many wild cards in the proverbial deck when it comes to drawing new lines. The role that redistricting plays in future elections is often overstated, but the partisan make-up of districts is undoubtedly a significant factor, often giving one party’s candidate a head start before the campaign even begins. It is safe to say that Republicans have the advantage heading into the 2011 plan-drawing extravaganza.

In 43 states, legislatures have the first authority for drawing new U.S. House districts if the state is populous enough to have more than one district. In the other seven states, a board or commission handles the task, including in California where voters reassigned the job to a new 14 member commission in this past election. In 37 states, legislatures are also responsible for drawing their own new districts. Governors also play a role in redistricting in most states through their traditional veto power. Of the 435 U.S. House districts, 195 are in states where the legislature and governor will draw the lines and both of them are controlled by the GOP. Democrats hold both branches of government in states that will draw 49 congressional districts. States with divided control will draw 92 districts, and 92 more are in states where a commission will draft the plans or in Iowa, which has a unique, depoliticized process for adopting maps. Finally, it is expected that seven states will only have one seat in the House and thus congressional redistricting will not take place.

Redistricting will only be part of the story in 2011, however. State revenues are only beginning to show any sign of a turnaround and with the phase-out of the federal stimulus money that kept many states afloat last year, budgeting once again looks to be a dismal exercise. Let us hope that the many new legislators heading to state capitols next year bring with them some innovative approaches to state policymaking.

Tim Storey is a Senior Fellow with the National Conference of State Legislatures where he has been researching legislative elections and redistricting for over 20 years.

This article was first published by Sabato's Crystal Ball

See Other Commentary By Tim Storey