Obama and the Redefinition of Presidential Coattails

A Commentary By Rhodes Cook
in Political Commentary

Barack Obama showed considerable vote-getting ability in last fall's presidential election, with a clear-cut win in both popular and electoral votes. But when it came to presidential coattails, his were of the same modest length of many of his immediate predecessors.

A tally of the 2008 presidential vote by congressional district shows that Obama drew a higher percentage of the vote than only 36 Democratic House winners in their districts--a common measurement of coattail pull. It is a total that represents just 14 percent of the 257 House Democrats elected in November.

And it pales when compared to some of the big Democratic and Republican presidential winners of the last half century or so. Dwight D. Eisenhower in 1956, Lyndon B. Johnson in 1964, and Richard Nixon in 1972, all ran ahead of more than 100 victorious House candidates of their own party. Only one candidate since then (Ronald Reagan in 1984) has run ahead of more than 40.

It is no secret why presidential coattails have diminished dramatically in length. Recent winners have not won by the massive landslides that Ike, LBJ or Nixon did--with popular vote margins of 15 percentage points or more. Obama's 7 percentage point victory is the largest for any presidential winner in two decades.

Meanwhile, congressional candidates have shown an increasing ability to run campaigns largely insulated from the vagaries of presidential politics. Gone are the low-budget House candidacies of the past that were often tied to the success or failure of the top of the ticket. Nowadays, state-of-the-art congressional campaigns are the norm and can rival a decent-sized Senate race in their expense. As a consequence, only a small minority of House are closely contested anymore.

Yet the quantitative measurement of presidential coattails is just one way to look at a candidate's success in helping his party. Another way features a more "tonal" approach. It focuses on a candidate's ability to lay the framework for a campaign that both the presidential nominee and members of his party can successfully run. Ronald Reagan laid such a framework in 1980. So did Barack Obama in 2008.

Reagan ran ahead of only 38 victorious House Republicans in 1980. But his conservative message, winning manner, and hard-hitting attacks on the failures of the Democratic administration were widely embraced by his Republican ticket-mates. The result was a sweeping victory for the GOP that fall, which featured the party's capture of the White House at one end of Pennsylvania Avenue and the Senate at the other.

As for Obama, his congressional coattails were almost exactly the same modest length as Reagan's when the former California governor was first elected almost three decades ago. But the essence of the Obama candidacy in 2008 was less the coattails he offered other Democrats than the environment for the party's success that he helped to create.

Like Reagan, he took advantage of the wide openings the opposition provided, while putting forward a transformative agenda that the bulk of his party could embrace. In November, the Democrats emerged with control of both ends of Pennsylvania Avenue, with firmer majorities on both sides of Capitol Hill.

Either milieu, quantitative or tonal, can lead to effective government. In the first year after LBJ's landslide win, replete with its long coattails, came congressional passage of many of the signature programs of the Great Society--including Medicaid, the War on Poverty, and the Voting Rights Act of 1965.

Even though Reagan's coattails were much shorter than Johnson's, the presidential campaign of the former California governor set the course for a new style of government. And not long after the 1980 election the "Reagan Revolution" was launched, with a bold agenda of lower taxes, less domestic spending and a stronger national defense.

To a degree, Obama has brought his party to a similar point. His coattails in 2008 were short in a quantitative sense. But he was able to enliven the Democratic base, attract large numbers of young and independent voters, and help to increase the party's registration totals in a way that boosted Democratic candidates up and down the ticket.

Now, the challenge for Obama is to transfer his considerable electoral skills to the task of governing. If he succeeds, he will have taken another page from the Reagan playbook. If he fails, it will not be due to short coattails. 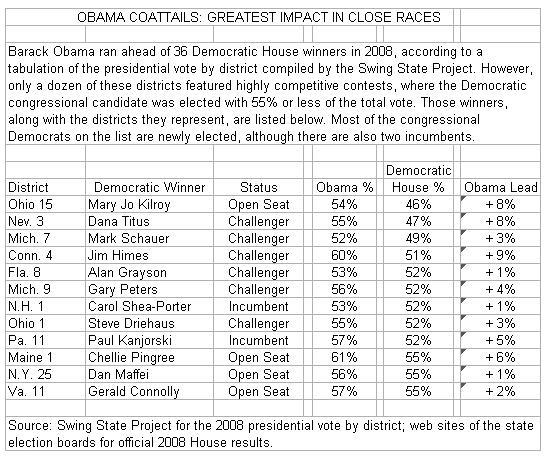 See Other Commentary by Rhodes Cook