A Commentary By Larry J. Sabato
in Political Commentary

It was nearly twenty years ago. While assessing L. Douglas Wilder's 1989 victory for governor of Virginia, I first noticed that for four consecutive elections (1977, 1981, 1985, and 1989), the Old Dominion had voted for the gubernatorial nominee of the party opposite to the one controlling the White House. It merited a paragraph, but nothing more. After all, four data points do not a trend make. This could have been a mere coincidence. For one thing, it seemed early--just nine months after a president was sworn in--for an off-year, anti-White House incumbent effect to be real.

Another four elections for governor have passed (1993, 1997, 2001, and 2005), and the presidential jinx is still holding. Maybe there is something to it, with another test awaiting this November. Republican Bob McDonnell hopes it is authentic, and Democrat Creigh Deeds is intent on proving it a fake.

Let's take a brief look back at the eight elections under discussion. The most enlightening data will be presidential popularity. By clicking here , you can see the graphs of the Gallup job-approval ratings for newly sworn-in presidents in Virginia's gubernatorial election years. The gubernatorial winners, and their percentages, are shown below. 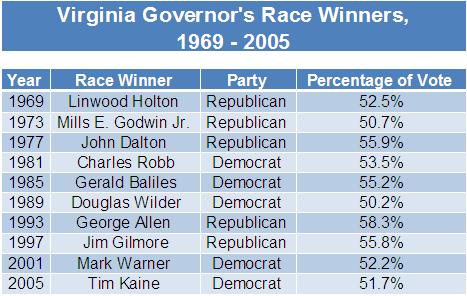 Unfortunately, until very recently, state-level presidential job-approval polls were rare or nonexistent, so we must rely on national data. Virginia was more Republican than average until 2008, and therefore it is reasonable to assume that Democratic presidents had somewhat lower than average approval ratings in the state, while GOP presidents had higher than average ratings.

Here's the surprise: All the presidents except for Bill Clinton in 1993 and George W. Bush in 2005 had healthy national job-approval numbers, ranging from the mid-50s (several chief executives) to the 80s (George W. Bush after 9/11 in 2001). These moderately-to-strongly positive ratings for the White House party did not stop the opposition party from winning the governorship. Even Bush's stratospheric ratings had no impact. In 2001 Democrat Mark Warner handily defeated Republican Mark Earley.

In the 1993 Clinton and 2005 Bush cases, low presidential ratings almost certainly contributed to the opposition party carrying the Virginia statehouse. Two examples aren't sufficient for a firm conclusion, but common sense suggests that when a president is below 50 percent, the presidential party nominee for governor is seriously handicapped.

By November of a new presidential term, the honeymoon glow is gone, and presidents have made many controversial decisions. The euphoria that accompanies the opening of an administration--the feeling that anything is possible, that many problems can be tackled and solved, that the world can be transformed in positive ways--has evaporated, replaced by the sobering reality and intractable nature of many long-term predicaments.

It is not just disillusionment. That age-old, Founding Fathers-induced American impulse to "check and balance" kicks in. Voters of the president's party are less satisfied and motivated. Voters of the opposition party are energized, concerned, and sometimes outraged by the president's actions. The people who show up on Election Day are disproportionately members of the opposition party, and they want to send Washington and especially the White House a message.

This is what almost always happens in the regularly scheduled midterm election, halfway through a presidential term. The midterm effect begins a year earlier in Virginia because of the sharp focus created by an election for governor. New Jersey is a separate case, but in the past five elections (1989 onwards) the same phenomenon has been observed-the presidential opposition party wins the statehouse. If early polls in New Jersey are correct, 2009 will be the sixth consecutive example, since Republican Chris Christie is leading Democratic Gov. Jon Corzine.

Why didn't this effect manifest itself before 1977 in Virginia? Until the mid-1960s, the Old Dominion was effectively a one-party state. The Democratic primary was "tantamount to election," and so off-year presidential influences were moot.

However, the first two gubernatorial contests of the two-party era in Virginia did not follow the modern pattern (see two more graphs, here ). In 1969 President Richard Nixon was in the mid-60s nationally (and probably higher in Virginia), and his campaigning for GOP nominee Linwood Holton aided Holton's election as the first Republican governor of the 20th century. But an even greater factor was deep Democratic division generated by a heated, enduring factional struggle in the party's summer primary and run-off . (The double-barreled battle was so damaging that the Democratic legislature abolished the run-off, beginning in 1971.)

By contrast, in November 1973, Nixon's job-approval had dropped into the upper 20s (perhaps the 30s in Virginia, where Nixon had won about 70 percent in 1972.) The cause was obvious: the unfolding Watergate scandal. Despite that, the Republican nominee, Mills Godwin, was able to defeat the Independent-Democratic candidate Henry Howell, 50.7 percent to 49.3 percent. On the other hand, the liberal Howell would have been unlikely to have come so close to Godwin, a former Democratic governor, except for Nixon's unpopularity. The off-year kickback against the incumbent president was very much a factor in the tight outcome. Shortly before the election, Nixon's corrupt Vice President Spiro Agnew had resigned in disgrace, and the "Saturday Night Massacre"--Nixon's firing of Watergate special prosecutor Archibald Cox--had occurred.

No one knows where President Obama's popularity will be by early November, but currently it is not robust. Obama secured 52.6 percent of the vote in Virginia last year, the closest of any state to his national 52.9 percent total. His early 2009 polling support in the 60s has now dropped to somewhere around his November 2008 showing in the state, plus or minus a few points. A better economy or other events might boost Obama higher in the next six weeks, or the president might continue to fall in the polls. If the latter occurs, history suggests that Republican nominee Bob McDonnell will probably win.

Even if Obama's ratings soar, though, it is clear that Creigh Deeds is on his own, with a mountain created by history to climb. The Democrat will need to rely on some combination of appealing issues, a smartly run campaign, and attractive personal qualities to beat the modern presidential jinx. It won't be easy, but nothing in politics at the highest level ever is.

Someday, someone will end the long string of anti-White House results in Virginia. Will that someday be November 3, 2009? Or will the presidential jinx strike again?