Three of the four candidates for the Republican presidential nomination -- Rick Santorum, Newt Gingrich and Ron Paul -- might soon agree with T.S. Eliot: for them, April may indeed be “the cruelest month.”

That’s because their front-running rival, Mitt Romney, appears poised to further pad his lead in delegates in upcoming Republican nomination contests, starting with Illinois next Tuesday and through a northeastern primary day on April 24.

It’s fair to ask how Romney’s position can be so strong after finishing third in the two major primaries held on Tuesday, Alabama and Mississippi. The most important thing anyone can do on any primary night is to remember the calendar -- not the primary schedule but the general election date. The two Deep South primaries appear critical, yet they will be long forgotten by Labor Day, much less Nov. 6. Barring a massive, difficult to fathom shift in this contest, Mitt Romney has a better than 80% chance to be the GOP nominee. No amount of wild tapping on CNN's magic wall will alter those odds.

The reason is that, much like when Hillary Clinton was fighting a front-running Barack Obama in the last few months of the 2008 Democratic primary, the delegate math -- and particularly the lack of true winner take all contests -- favors the candidate with the big delegate lead.

That candidate is Romney. While different news organizations have different ways of measuring delegates, calculations from National Public Radio, the Associated Press and others show Romney with a consistent lead, holding about two times as many delegates as Santorum. Days like Tuesday -- when the results in little-followed contests in American Samoa and Hawaii gave Romney an edge in delegates over Santorum at the end of the day -- generate great headlines for Santorum, but actually make his daunting odds for a delegate majority even longer.

We expect Romney’s delegate edge to grow on Santorum in the next six weeks.

Chart 1 shows our loose guesstimates of how many delegates each candidate should receive in the 11 upcoming contests that award delegates; non-binding caucuses, such as the one being held in Missouri on Saturday, are not included, nor are Republican “superdelegates,” party leaders who typically have a few slots in each state.

Gingrich and Paul are invisible men in our projections. While we can see them potentially winning delegates here or there, they are way, way behind in the delegate race and there are not obvious places for them to make up ground. For the purposes of this projection, we are keeping them in the race, but that could change at any point -- after failing to win either Mississippi or Alabama, but finishing ahead of Romney in both places, we find it hard to predict when, or even if, Gingrich will exit the race. And also, we do not know what effect his possible departure would have on the contest. It’s easy to assume that the lion’s share of his supporters would shift to Santorum, but that is not at all guaranteed.

Map 1 shows the remaining contests where voting -- either in caucuses or primaries -- has yet to be completed. The basic dynamic of the race has not changed; Romney does well in the Northeast and West, while Santorum does well in the South. After Louisiana on March 24, the GOP race heads North for April -- which is what makes it such a cruel month, potentially, for Romney’s rivals. 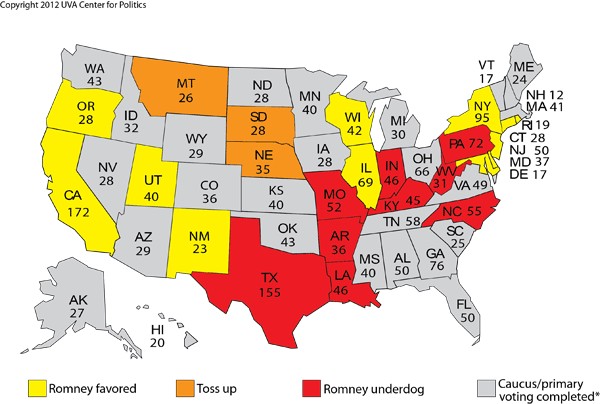 *States that have not yet formally awarded delegates but have held their primaries/caucuses/straw polls are considered as having voted for the purposes of this map.