Despite Bush having a 90 percent job approval a year earlier after a successful ground war in Kuwait, he squandered his political capital by reneging on his own campaign theme from the previous election, “Read my lips, no new taxes.”

In the Trump era, it’s still the economy, with record low unemployment, particularly for women, blacks, and Hispanics. The stock market has been on a tear, despite a recent and expected sell off. America is at full employment with more jobs available than employees to fill those jobs.

Consumer confidence surged to a near 18 year high, demonstrating that voters share in the optimism and enthusiasm of these strong economic indicators. Trump’s economy is not even running on all cylinders yet as his proposals still meet with resistance from Democrats and many NeverTrump Republicans.

The media only reluctantly reports strong economic news, being careful to not attribute any of it to President Trump. Instead they try to make the case, as NPR did, that today’s economic juggernaut is due to the last president, now over 2 ½ years out of office. Another of many examples of fake news and history revision, a staple of modern media.

Economic indicators are easy to measure but what may be equally or even more important in the 2020 election is voter enthusiasm. This is harder to quantify compared to unemployment numbers or the S&P 500 index.

One such measure is consumer confidence. Rasmussen, the most accurate pollster in the 2016 election noted this.

Thirty-nine percent (39%) of Likely U.S. Voters think the country is heading in the right direction, according to a new Rasmussen Reports national telephone and online survey for the week ending August 8. By comparison, this number ran in the mid- to upper 20s for much of 2016, President Obama's last full year in office.

On August 15, Rasmussen also reported, in their Daily Presidential Tracking Poll, that Trump’s total approval was at 46 percent, compared to Obama at 44 percent at the same point in their respective presidencies.

I suggest another metric to gauge voter enthusiasm, crowd size. As we are in campaign mode, all of the candidates are holding campaign rallies around the country. Trump was famous for holding massive rallies in 2016, several in one day, as election day drew near. In fact, on the day before the 2016 election, Trump held five rallies in five states, his last one running into the wee hours of election morning.

Meanwhile Mrs. Clinton was gulping chardonnay, picking out drapes for the oval office, and trying not to tumble to the ground in front of a camera. Her rallies, the few she held, were far less enthusiastic and much smaller in size. If one used the metric, “It’s the crowd, stupid” to predict the electoral outcome, the results would have been far more accurate than the myriad polls predicting a Clinton landslide.

Crowd sizes serve as a good metric again in the run up to the 2020 election. The Drudge Report joined the fake news brigade with this misleading front-page banner this week. 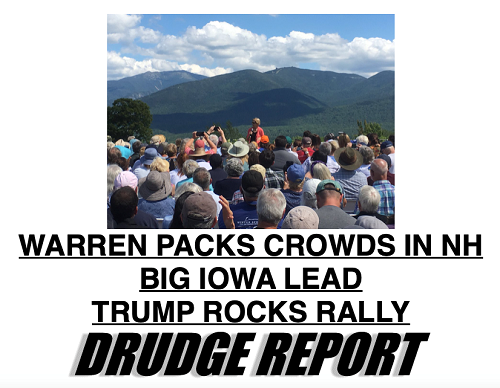 Did Senator Elizabeth Warren really “pack a crowd” in New Hampshire? Despite the misleading banner, Drudge linked to an article with this headline, “Warren speaks to crowd of hundreds in Franconia.” She “spoke to a crowd of more than 700 voters” according to the article.

How much more? Certainly, less than 800 else the headline would have said she “spoke to a crowd of nearly 800 voters.” How did that crowd compare to another campaign rally in the same state on the next day?

Is Warren just another of the 20 desperate Democrats seeking the nomination? Hardly, as she is only one point behind front runner Joe Biden. Warren is not a bottom of the barrel candidate like Bill de Blasio who drew only 15 people to a recent campaign event in Iowa, with more media in his audience than voters.

This reinforces my correlation of crowd sizes and electoral popularity. Warren had 700 attendees and she’s the co-front runner. De Blasio is polling at zero percent and his “crowd” of 15 reflects as much.

Who else held a rally this week in New Hampshire? Another presidential candidate who drew over 11,000 voters to his rally, filling the auditorium to capacity. That’s 15 times the audience that Warren drew. As usual, many more showed up to see the President but couldn’t watch the rally in the actual venue, instead watching outside in the overflow space.

From the photos in this article, it’s safe to conclude that more voters were watching the Trump rally on a big screen television outside the auditorium than were attending Senator Warren’s rally the previous day, in the same state, as a photo from this tweet shows.

Video from Trump’s Thursday night rally shows the size and enthusiasm of the audience. 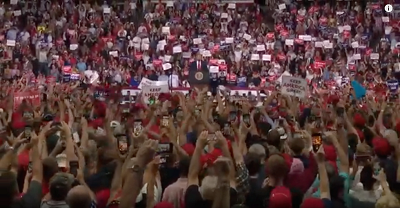 Joel Pollak from Breitbart tweeted a photo of a traffic jam 10 miles outside the Trump rally. I didn’t see any photos in the NY Times or Washington Post of traffic jams outside the Warren rally.

And don’t forget that New Hampshire is a blue state, casting it’s four electoral votes for Hillary Clinton in 2016, and Barack Obama twice in the two previous elections. If I had to guess which candidate is going to win New Hampshire in 2020, the crowd metric predicts Donald Trump.

Rather than listen to the nay-sayers on cable news, use your own eyes. Look at crowd sizes and enthusiasm as a better metric than opinion polls which oversample Democrats, the same polls that predicted a Clinton landslide victory.

Despite CNN’s constant contention that “President Trump is on the ropes”, remember that “It’s the crowd, stupid.”

Brian C. Joondeph, MD, is a Denver based physician and freelance writer whose pieces have appeared in American Thinker, Daily Caller, and other publications. Follow him on Facebook,  LinkedIn, Twitter, and QuodVerum.