This is a reversal from last week when Trump had an equally insignificant 43% to 42% lead. This is, however, the first time Clinton has edged ahead of Trump in a month. The race has been neck-and-neck in Rasmussen Reports surveying since last October. (More below) 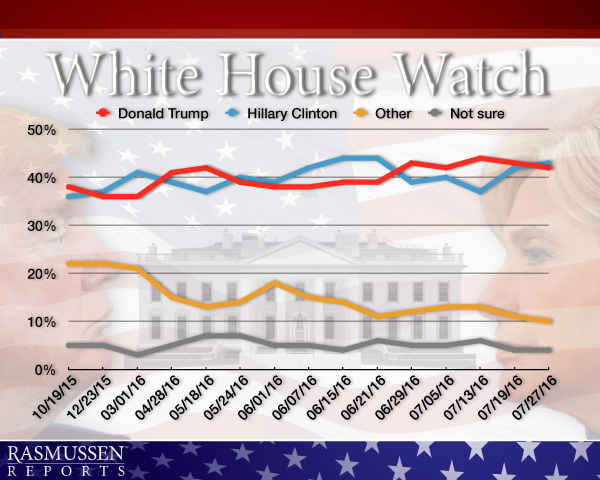 The latest survey was taken Tuesday and Wednesday nights, so we won’t know until next week whether Clinton generates any bounce from her acceptance of the Democratic nomination in a speech before the party’s national convention tonight. Last week’s survey was taken before Trump’s acceptance speech, so if he got any bounce from his convention, it has been blunted by the opening days of the Democratic convention.

Trump still has stronger support among voters in his own party (86%) than Clinton does among Democrats (79%). But this week Clinton has taken a five-point lead among voters not affiliated with either major party.

The survey of 1,000 Likely Voters was conducted on July 26-27, 2016 by Rasmussen Reports. The margin of sampling error is +/- 3 percentage points with a 95% level of confidence. Field work for all Rasmussen Reports surveys is conducted by Pulse Opinion Research, LLC. See methodology.

Voters give mixed marks to this year’s primaries and candidate debates, but a sizable number say they’ve changed favorites since the first of the year.

Clinton has generally had a bigger gender gap problem with men than Trump has had with women, but this week the two are running even. Trump is up by four points among men, while Clinton is up five among women.

Those under 40 still prefer the Democrat, while their elders continue to give the advantage to her GOP rival. But support for another candidate remains higher among younger voters than it is among those 40 and older.

Clinton still has an overwhelming lead among blacks. Trump leads among whites and other minority voters.

As in previous presidential election cycles, voters expect reporters covering political campaigns to help their favorite candidates and think it's far more likely they will help the Democrat than the Republican.

Trump’s convention was unconventional, to say the least.

Trump trashed his rival's tenure as secretary of State in his convention acceptance speech, but as far as voters are concerned, it's Clinton's biggest professional achievement.

Heading into the 2016 Democratic National Convention this week, the party’s progressive wing had a lot to be fired up about, and it wasn’t the party's nominee.

Less that half of Democrats feel Clinton has done enough to win over supporters of her primary rival Senator Bernie Sanders, but most voters in their party still think there's a good chance Sanders supporters will back the nominee in the fall.

The survey of 1,000 Likely Voters was conducted on July 26-27, 2016 by Rasmussen Reports. The margin of sampling error is +/- 3 percentage points with a 95% level of confidence. Field work for all Rasmussen Reports surveys is conducted by Pulse Opinion Research, LLC. See methodology.

What America Thinks: Is Bill Ready to Be First Man?