The latest Rasmussen Reports weekly Trump Change survey finds that 77% of Likely Republican Voters still think the billionaire businessman is likely to win their party’s presidential nomination, but that now includes just 40% who consider it Very Likely. This compares to 81% and 42% a week ago.

But three weeks ago at this time following several big primary wins for Trump, 87% of GOP voters viewed his nomination as likely, with 59% who said it was Very Likely. Both were highs to date but have been trending downward ever since. This is Trump’s worst showing since mid-February.

Eighteen percent (18%) of Republicans now see Trump’s nomination as unlikely, although that still includes only four percent (4%) who say it is Not At All Likely. (To see survey question wording, click here.) 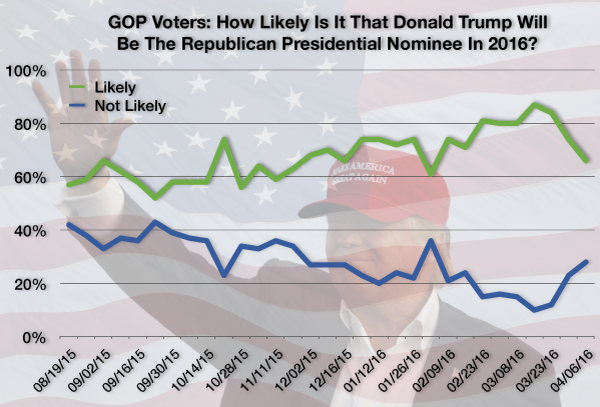 Trump is hoping a strong finish in the upcoming New York primary will reverse this trend. Rasmussen Reports is currently asking voters about the likelihood that either of his remaining Republican rivals, Senator Ted Cruz of Texas and Ohio Governor John Kasich, will win the party’s nomination. We’ll release those findings on Monday morning.

Among all likely voters, 66% believe Trump is still likely to be the GOP nominee, but that’s down eight points from 74% last week. The new finding includes only 28% who regard his nomination as Very Likely, down from 37% a week ago and a high of 46% three weeks ago. Twenty-eight percent (28%) say Trump is unlikely to be nominated, with 11% who say it is Not At All Likely. This, too, is the highest level of doubt in two months.

The survey of 1,000 Likely U.S. Voters was conducted on April 5-6, 2016 by Rasmussen Reports. The margin of sampling error is +/- 3 percentage points with a 95% level of confidence. Field work for all Rasmussen Reports surveys is conducted by Pulse Opinion Research, LLC. See methodology.

While Republican Party leaders talk increasingly of a brokered convention, just over half of GOP voters think their presidential nominee should be the candidate who arrives at the convention with the most delegates. Right now, either Trump or Cruz is that candidate.

Some top Republicans see House Speaker Paul Ryan as the party’s savior if they can just make him the GOP presidential nominee. But Ryan loses to both major Democratic candidates in head-to-head matchups, with roughly a quarter of Republicans looking somewhere else.

Only 19% of Democrats and 26% of voters not affiliated with either major political party think Trump is Very Likely to win the Republican nomination, down from 31% and 39% respectively a week ago.

Belief that Trump is Very Likely to be the nominee has fallen noticeably in virtually every demographic category.

All three remaining Republican candidates refused to say at a recent CNN town whether they would support the party’s eventual presidential nominee if they didn’t win. Twenty-four percent (24%) of Republican voters said last month that they are Very Likely to vote for Trump if he runs as a third-party presidential candidate.

Trump recently referred to the North Atlantic Treaty Organization (NATO) as “obsolete” and questioned why U.S. taxpayers should still be paying heavily to defend Europe and South Korea. But most voters think those long-standing arrangements are just fine.

However, support remains high and unchanged among Republicans for Trump’s proposal to temporarily ban Muslims from entering the United States.

Most Republicans also still favor Trump’s proposed construction of a wall along the U.S. border with Mexico.

The survey of 1,000 Likely U.S. Voters was conducted on April 5-6, 2016 by Rasmussen Reports. The margin of sampling error is +/- 3 percentage points with a 95% level of confidence. Field work for all Rasmussen Reports surveys is conducted by Pulse Opinion Research, LLC. See methodology.