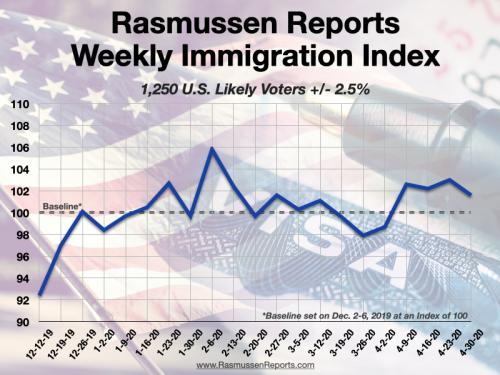 Following President Trump’s announcement of a temporary freeze on most legal immigration to give Americans an edge in the post-coronavirus job market, just 36% of Likely U.S. Voters feel the government is doing too little to reduce illegal border crossings and visitor overstays – a new low first reached last week. Unchanged is the 34% who say the government is doing too much. Twenty-three percent (23%) rate the level of action as about right, a finding that has been climbing in recent weeks.

Sixty-five percent (65%) continue to believe the government should mandate employers to use the federal electronic E-Verify system to help ensure that they hire only legal workers for U.S. jobs. Only 21% disagree, with 14% undecided.

Sixty percent (60%) of voters favor giving lifetime work permits to most of the approximately two million illegal residents who came to this country when they were minors, with 35% who Strongly Favor it. Thirty-three percent (33%) are opposed, including 15% who are Strongly Opposed to such a move.

But just 47% favor giving lifetime work permits to most of the estimated 12 million illegal residents of all ages who currently reside in the United States, including 22% who Strongly Favor it. Just as many (46%) are opposed, with 27% who are Strongly Opposed.

Legal immigration has averaged around a million annually in recent years, but 47% of voters believe the government should be adding no more than 750,000 new immigrants each year, with 34% who say it should be fewer than 500,000. Thirty-eight percent (38%) favor adding one million or more legal newcomers per year, including 11% who say the figure should be higher than 1.5 million. Fifteen percent (15%) are not sure.

When businesses say they are having trouble finding Americans to take jobs in construction, manufacturing, hospitality and other service work, 62% say it is better for the country if these businesses raise the pay and try harder to recruit non-working Americans even if it causes prices to rise. Just 24% disagree and say it’s better for the country if the government brings in new foreign workers to help keep business costs and prices down. Fourteen percent (14%) are undecided.

Thirty percent (30%) feel that Congress should increase the number of foreign workers taking higher-skill U.S. jobs. Fifty-six percent (56%) think the country already has enough talented people to train and recruit for most of those jobs. Fourteen percent (14%) are not sure.

The survey of 1,250 Likely U.S. Voters was conducted April 26-30, 2020 by Rasmussen Reports. The margin of sampling error is +/- 3 percentage points with a 95% level of confidence. Field work for all Rasmussen Reports surveys is conducted by Pulse Opinion Research, LLC. See methodology.